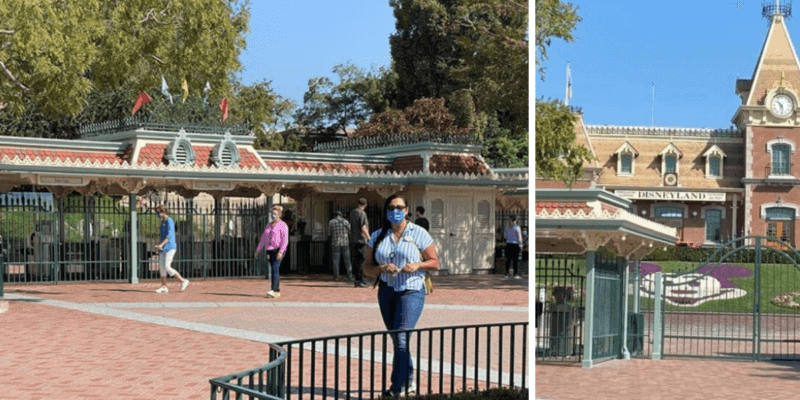 Though we don’t yet have an announced reopening date for Disneyland and Disney California Adventure, activity continues to be spotted a the southern California Disney theme parks.

A photo from @paulsthemeparkadventures shows what looks like it may be filming possibly taking place at the entrance of Disneyland.  We also have videos of the filming below as well. In the photo, we can see several Cast Members at the Disneyland gates, and they were later spotted entering Disney California Adventure, as well. While Disney has not stated an official reopening date for Disneyland theme park, this movement is an exciting step in (hopefully) the right direction.

Check out the image here, shared to Instagram today:

Appears to be some activity going on in front of Disneyland ? might be filming happening they even have a cast member at the turnstile

Here is a video look from @themeparktagalong on Instagram,

Got super lucky being at the right place at the right time 🙂 here’s more footage of the filming going on today at Disneyland!

While some are speculating this could be for some kind of commercial possibly even a safety commercial for the park once it reopens, but nothing is for certain.

The unprecedented six-month closure of Disneyland is finally starting to see signs of movement around the theme park. Earlier this week Disney executive Josh D’Amaro has pleaded with California state officials to give Disneyland guidelines in which they can reopen. He is quoted as saying,

Disneyland officials have even announced that they will implement the same reservation system that Walt Disney World has been using since its reopening, in an effort to promote safety for all Guests and Cast Members. As well as offer their Cast Members a coronavirus testing facility for their return to work, whenever that may be.

We have continued to cover all movement around Disneyland and California Adventure for signs of a possible reopening, here is what we have found. As you can see there have been many preparations being made to Disneyland in anticipation of the day they can once again resume operations. We have seen Josh D’Amaro inside the parks, and social distancing markers placed inside the park as well. Our fingers are crossed that we will have an official word from Disney on a reopening date soon, but until then we will continue to monitor any changes being made around the park. We cannot know an opening date for sure until Disney announces one officially.

When do you think Disneyland could reopen? Let us know what you think in the comments!

Comments Off on Possible Filming Taking Place at Disneyland Entrance