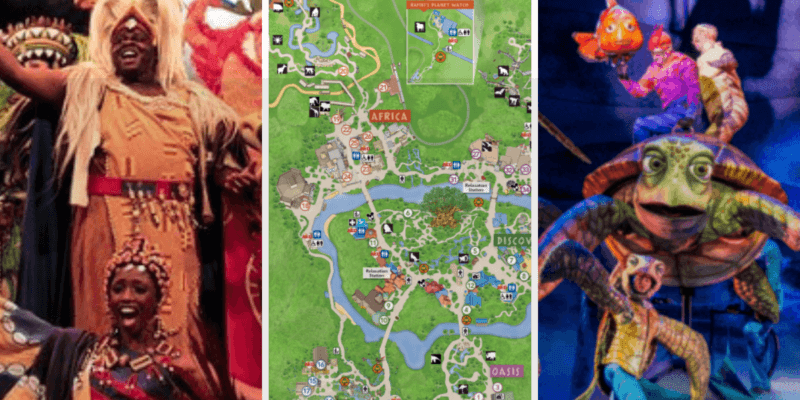 As COVID-19 continues to impact Disney Parks around the world, Walt Disney World Resort has recently updated their park maps to reflect some of the entertainment cuts in their theme parks that we saw earlier this year.

Festival of the Lion King and Finding Nemo: The Musical — Gone

Disney has chosen to remove Festival of the Lion King and Finding Nemo: The Musical off of the newest Animal Kingdom park maps. The theaters – Theater in the Wild and Harambe Theater – where these shows take place still have their buildings pictured on the map. However, the Harambe Theater does not include the list of what shows normally occurs within it. The Theater in the Wild is not labeled on the map at all, though the building is visible. If you would like to see the full new Animal Kingdom map, click here for a PDF version.

On the My Disney Experience app, both shows are stilled labeled on their corresponding theater buildings. Both shows are listed as “Temporarily Unavailable” on the app.

Why are these Shows Missing on the Park Maps?

These entertainment options have likely been eliminated on the park map to avoid Guest confusion as they navigate the Disney theme park. As we have reported, due to COVID-19, Disney, unfortunately, laid off several Cast Members, including those who performed in these shows.

Disney has put these safety regulations in place to keep their Guests and Cast Members safe during the health crisis.

More Than an Empty Space on the Maps

During this time of change, we are all craving a sense of normalcy and a return to the Walt Disney World we know and love. Though the parks are open, it’s odd to see the ghosts of pre-COVID entertainment haunting the parks. These shows are more than just entertainment. They are a source of income for Cast Members and on-stage magic for Guests.

These Cast Members are passionate about the wonder they bring to the Guests of Disney’s Animal Kingdom. Just look at this encouragement the cast of Festival of the Lion King brought Disney fans back in May through a virtual performance. These shows bring joy to Guests and carry on vacation traditions for families around the world while bringing stories to life on stage. I, personally, hope to see these shows return to the Disney Park as soon as it is safely possible.

When Will These Shows Return?

While we do not know exactly when these shows will return, Chairman of Disney Parks, Experiences, and Products, Josh D’Amaro, has said that the company plans to bring back entertainment offerings when it is safe to do so.

The 32,000 Cast Members Disney has laid off are greatly missed, and we hope they will return soon along with these entertainment options. After all, Walt Disney said, “You can dream, create, design, and build the most wonderful place in the world, but it requires people to make the dream a reality.”

In the meantime, you can visit Pandora’s majestic wonders, wander Discovery Island, or climb aboard Expedition Everest with your favorite Yeti. It is not the same as live performances, but each attraction still delivers that Disney magic we all need.

If you could bring back 1 entertainment offering at Disney World, what would it be?