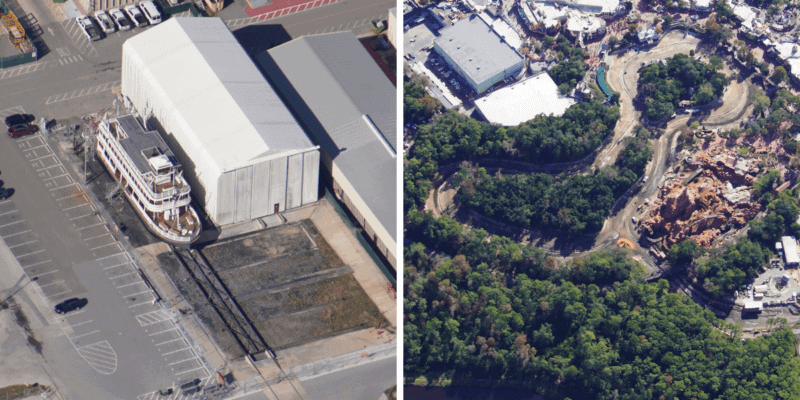 Another day, and another glimpse into Disney’s refurbishment efforts on a beloved attraction. This time, insider @bioreconstruct gives us a bird’s eye view of the renovations underway at Magic Kingdom involving the Rivers of America and iconic riverboat, the Liberty Belle.

Let’s check it out:

Immediately we see what Disney World Guests have been seeing for a few weeks now: Rivers of America completely drained, with no sign of the Liberty Belle, and Tom Sawyer Island sitting empty amidst it all.

Aerial look at drained Rivers of America. Also seen is refurbishment of the locks, near the backstage bridge. A dam is short distance away.

Many runDisney courses travel across this bridge. pic.twitter.com/XfDL4mMcvn

But thanks to these aerial photos, we can see that the Rivers of America is actually filled by water from the Seven Seas Lagoon via a service canal that also harbors the floats for the Electrical Water Pageant.

It is at the mouth of this canal that the new pedestrian bridge that connects Disney’s Grand Floridian Resort & Spa with the Magic Kingdom Entrance for Guests who prefer to walk passes over, and it is also the outlet which the Liberty Belle apparently used to transfer for refurbishment.

Liberty Belle riverboat also passes through this canal for refurbishment at the marina northwest of the park. pic.twitter.com/bkR6TN2rMW

Related: Will the Walt Disney World Railroad Be Closed For Nearly 3 Years?

@bioreconstruct also gives us a look at that Marina which is situated in Bay Lake, just west of the Magic Kingdom.

He explains, “Aerial look at the Magic Kingdom service marina, located northeast of the park. Liberty Belle is in refurbishment. Riverboat comes here through a service canal West of MK, and then across the Contemporary water bridge.”

Aerial look at the Magic Kingdom service marina, located northeast of the park. Liberty Belle is in refurbishment. Riverboat comes here through a service canal West of MK, and then across the Contemporary water bridge. pic.twitter.com/soZN1hjxHa

Low and behold, we can see the Liberty Belle, in dry dock getting her much-needed refurbishment. We can see that the steam-powered paddleboat was lifted out of the water with movable rails and it appears that the white structure next to it could be moved into a position that allowed Imagineers to fit the boat inside.

Aerial view of Liberty Belle in refurbishment. Located in the Magic Kingdom area service marina, northeast of the park. Note the movable rails, and the riverboat can also be serviced inside the structure. pic.twitter.com/3OVbPXmwGu

Related: After 11 Months, The PeopleMover is Still Set to Reopen in 3 Weeks!

At this time, it is still unclear when we can expect “Rivers of America” to be filled, and see the Liberty Belle setting sail once again. We at Inside the Magic will keep our ears to the ground and we will continue to update our readers as more information comes to light.

If you are starting to plan your next Walt Disney World Resort Vacation, our friends at Academy Travel can help!

Are you missing the Liberty Belle or visiting Tom Sawyer Island? Let us know in the comments!

Comments Off on PHOTOS: Update on Rivers of America, Liberty Belle Refurbishment