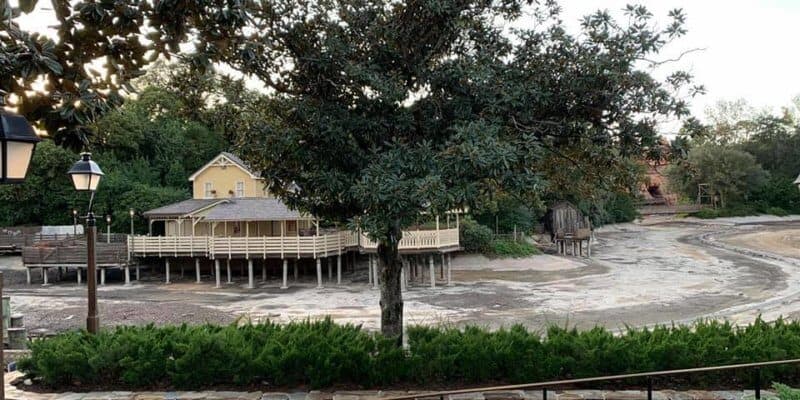 Walt Disney’s love of American history and Americana is well-known — after all, he originally wanted to construct the historical Disney’s America theme park in Virginia.

Although this concept never came to fruition, all of Walt’s theme parks pay homage to American history in some way or another. At Walt Disney World Resort’s Magic Kingdom, Tom Sawyer Island and Liberty Square immediately come to mind.

Tom Sawyer Island is currently closed for refurbishment. As you can see from this photo [below], the Disney World attraction is completely inaccessible at this time — the Rivers of America waterway has been drained as a result of the ongoing construction.

Now, Disney World officials have filed a new permit for the ongoing Tom Sawyer Island project. The permit is for “General Construction,” which can mean anything from minor repairs on an existing structure to a major renovation job.

Though we don’t know much since the permit is vague, we do know that the contractor listed on this particular Disney construction permit is CEC General Contractors.

Tom Sawyer Island is the perfect attraction for those who love Mark Twain’s classic novels about Tom Sawyer and Huckleberry Finn, or for those who simply don’t enjoy more thrilling rides and attractions at Disney World.

The self-guided experience is ideal for all ages and is especially popular among families with school-aged children. No official reopening date has been announced at this time.

Is Tom Sawyer Island one of your family’s favorite Magic Kingdom experiences?

Let Academy Travel help you plan your next Walt Disney World vacation to any of the Resort’s four theme parks — Magic Kingdom, EPCOT, Disney’s Animal Kingdom, and Disney’s Hollywood Studios. They will help you navigate the Park Pass system and handle every magical detail!