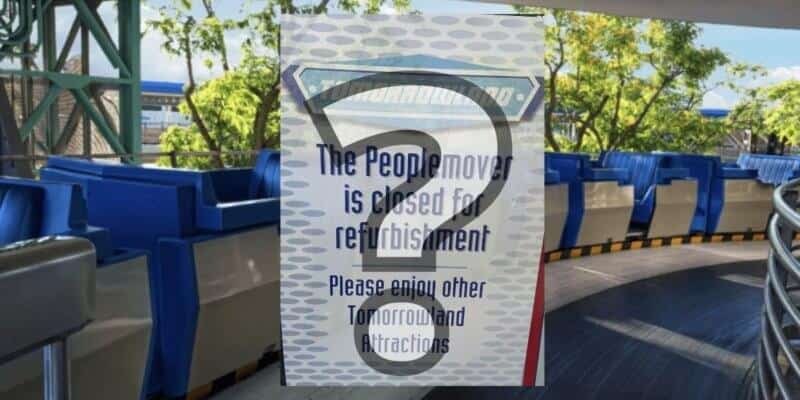 The Tomorrowland Transit Authority located inside Tomorrowland at Magic Kingdom has been closed ever since before the temporary park closures, which took place back in March. Once the theme parks reopened mid-July, Guests were hoping to see the PeopleMover open back up with the rest of the attractions, however, this wasn’t the case.

Guests weren’t sure what exactly was happening with this Tomorrowland attraction as Disney didn’t officially close it for refurbishment right away. Some were speculating that Disney was not running the Magic Kingdom attraction due to the construction work being done on the upcoming Tomorrowland roller coaster, TRON, while others suspected Disney just needed new parts to fix the Tomorrowland Transit Authority PeopleMover.

However, the Walt Disney World website eventually officially updated the website back in August to mark the PeopleMover as “closed for refurbishment” until November. Once October came, Disney realized the attraction wouldn’t be ready by November and so they extended the refurbishment until December 25, 2020.

Just Three Weeks Away and Testing!

We are now just three weeks away from the set reopening date of January 10 and Disney has not made any adjustments to the Magic Kingdom park calendar. This is a good sign considering in the past, Disney has extended the refurbishment months in advance.

We have also seen Cast Members working on and testing the Tomorrowland Transit Authority on several different occasions, which means we may once again be able to take the Grand Circle Tour of Tomorrowland come 2021.

Inside the Magic will continue to update you as we get information regarding the Tomorrowland Transit Authority PeopleMover, but as of right now, it looks as though beginning January 10, 2021, Guests will once again be able to ride this fan-favorite.

Want to book a trip to experience this attraction for yourself? Start planning today!

Are you excited to once again be able to ride the Tomorrowland Transit Authority PeopleMover? Let us know in the comments below.

Comments Off on After 11 Months, The PeopleMover is Still Set to Reopen in 3 Weeks!