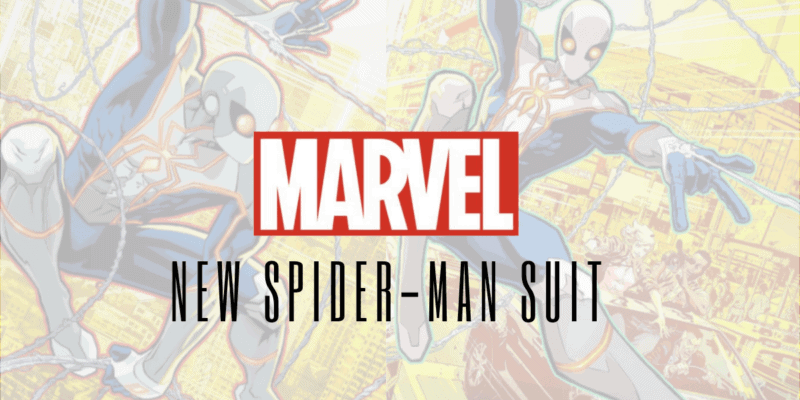 Some superheroes have one iconic look, others have a wardrobe of iconic styles. Spider-Man is a hero of many talents – and outfits! Well, now our favorite Web-slinger just added another suit to his collection. Marvel recently unveiled a new Spider-Man suit in comic book issue #61 of The Amazing Spider-Man. A new look for Spider-Man for a new year of saving the world. Though the look is revealed first in issue #61, it is featured on the covers of upcoming issues #62 and #63. Let’s look at Spidey’s new suit, and at a few iconic Spider-Man suits of the past.

You don’t need to tune into your spider-sense to know this stylish suit looks great on Marvel’s wall-crawler. This outfit is sure to be featured on the cover of the Daily Bugle — not even J. Jonah Jameson can be mad at this stylish suit (but I bet he’ll try).

This new suit looks techy and suave to reflect modern trends. Created by artist Dustin Weaver, this cyberpunk look sports a mask that reminds me a bit of Ultron. The orange webbing design looks like glowing orange lava – or like a spin on the orange suits from the Tron universe. The silver, orange, and blue look helps Spider-Man swing into 2021 with modern style in his upgraded suit.

One of Spider-Man’s newest looks is from the MCU (Marvel Cinematic Universe). This Iron Man-esque suit (pictured above), known as Iron Spider Armor, has been featured in Avengers: Infinity War, Avengers: Endgame, as well as Tom Holland’s stand-alone Spider-Man films in the MCU. This suit is similar to Spidey’s Iron Spider look in the comics as well.

Next, we have Spider-Man’s black suit due to his Venom arc. It’s a dark version of Spider-Man reflected in a somber suit.

Of course, there is the classic suit of NYC’s local webhead. This red and blue costume has been a traditional and iconic symbol of Spidey-style.

These aren’t even all of Spider-Man’s looks! These are just a few of the Spider-Man suits and iconic looks from the multiverse, which the MCU will be diving into in the near future.

While you wait for The Amazing Spider-Man Marvel comics to return in March 2021, there’s plenty of Spidey stories to experience. You can check out the multiple animated series offered on Disney+, however Spider-Man: Homecoming and Spider-Man: Far from Home are not yet available on Disney+. You can, however, look forward to the MCU’s Spider-Man 3, set to debut in 2021 and starring Tobey Maguire and Andrew Garfield alongside the MCU’s Tom Holland.

Do you love this new Spider-Man suit? Let us know in the comments!