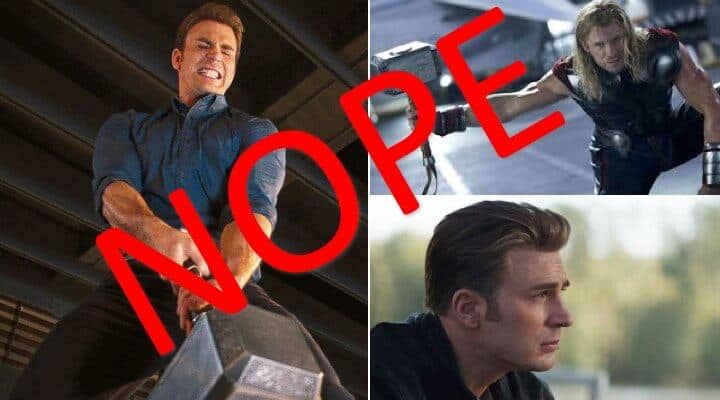 Without a doubt, the second most spectacular moment in Avengers: Endgame was when Captain America finally proved himself worthy to wield Thor’s mighty hammer, Mjolnir. I say second, as Steve Rogers shouting ‘Avengers assemble’ just tops it.

Theatres around the world erupted as Captain America finally called Thor’s Mjolnir to aid him in the battle against Thanos, and for good reason. It’s something that has precedent in the comic books, and it was already hinted at during Avengers: Age of Ultron, four years earlier.

After taking down Hydra, Iron Man, Captain Rogers, and of course the mighty Thor sit down with the other Avengers to chill, in what is probably the best scene in the movie. What follows is a tiny moment that had Marvel fans squealing. When it comes to Captain America’s turn, the hammer budges ever-so-slightly and Thor’s face turns to instant panic. It’s shrugged off as a joke, but the God of Thunder is clearly shaken, as both the Marvel movies and Norse mythology tell us time and again that only the worthy can wield the power of the mighty hammer.

For years, MCU fans put the scene down to Cap’s sense of kindness, suggesting that he knew he could lift the hammer straight away. However, in a new turn of events, Avengers: Endgame screenwriters Christopher Markus and Stephen McFeely, the guys behind the Captain America trilogy have given a different answer.

During a tweet-a-long commentary with ComicBook.com, the two suggested that Cap isn’t quite worthy in this film yet. The character still has to overcome the moment where he finds out about the Winter Soldier’s involvement with Tony Stark’s parent’s deaths in Captain America: Civil War.

I'd say he's not completely worthy yet. He still has the secret of Tony's parents' death to resolve. -CM #AvengersAssemble #QuarantineWatchParty https://t.co/xbUI6nbo1f

This is incredibly interesting to any die-hard fan of Marvel Studios. When Captain America took up the hammer in the Russo Brothers’ Avengers movie, it seemed obvious that he’d always known. Yet Markus and McFeely suggest that the superhero still wasn’t quite the worthy during Age of Ultron. Who’da thunk it!

It’s ok Cap. We still love you. The grief you gave Thanos with the hammer was worthy enough for us.

Did you think that Captain America knew he was worthy to lift Thor’s Hammer in Age of Ultron? How did you react when he laid the smackdown on Thanos in Endgame? Let us know in the comments below.

Comments Off on Say What?! Screenwriters Reveal Cap Couldn’t Lift Mjolnir in Age of Ultron and Why