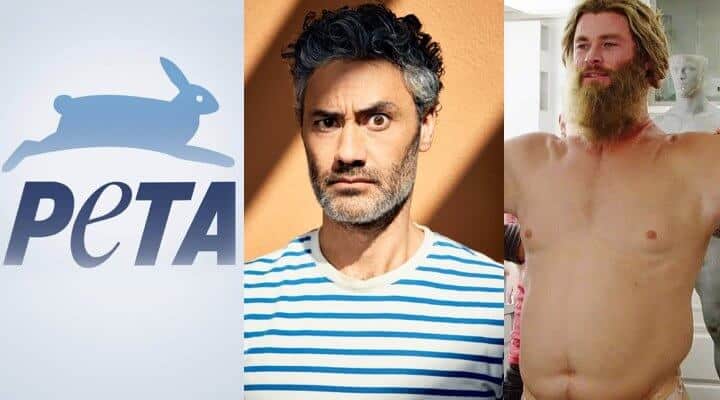 Representation and diversity are becoming an increasingly hot topic in the world of superheroes, and the movies of Marvel Studios are no exception. We’ve quite rightly seen the Marvel Cinematic Universe give opportunities to ethnic minorities, including gay characters, and cast trans actors.

However, one group that has yet to be represented are vegans. Well, PETA (People for the Ethical Treatment of Animals) have now advised Thor Ragnarok director Taika Waititi to do just that, and make Chris Hemsworth’s Thor enjoy a vegan diet. This, of course, comes after Avengers: Endgame had Hemsworth don a ‘fat suit’ and become what fans have dubbed ‘fat Thor’.

While it was certainly a shock, I found the emotional journey of the god of thunder to be quite touching in Endgame, as Thor proved himself worthy, showing that depression does not define who we are. Still, many Marvel fans are looking forward to Thor having a restored physique for the upcoming Thor: Love and Thunder, but returning director Taika Waititi has remained tight-lipped as to whether we’ll see the return of the ‘original Thor’.

However, this hasn’t stopped PETA suggesting that the god of thunder lose those few pounds by switching to a vegan diet. Take a look at the letter they sent to Taika Waititi himself below.

We understand that you have a bit of a weight problem on your hands, and PETA is here to help. As we all remember, Thor packed on a few pounds in Avengers: Endgame, so the question-consuming Marvel fans across the Nine Realms is how our favorite thunder god will return to his Ragnarockin’ bod in your upcoming film, Thor: Love and Thunder. We suggest taking a page from Chris Hemsworth’s own playbook and exploring what would happen if Thor tried going vegan.

According to his personal trainer, Hemsworth went vegan while filming the original Thor and Avengers films, developing a particular taste for beans and veggie burgers. Perhaps if Thor took the Bifrost Bridge to our world, he might get inspired by plant-based Avengers, Benedict Cumberbatch (Doctor Strange), and Natalie Portman (Jane Foster) and that battle armor would start fitting a little more comfortably.

If Thor is serious about protecting the Earth, going vegan makes a lot of sense—axing animal products from his diet could save more than 1,000 gallons of water, 20 pounds of carbon dioxide emissions, and 30 square feet of forest each day as well as the lives of nearly 200 animals a year! By having Thor go vegan, you could easily explain his restored physique while hammering home the benefits of a plant-based diet.

Just some food for thought …

Blimey. You’ve got to admire their boldness!

Thor: Love and Thunder is due to release in 2021, and will star Chris Hemsworth, Natalie Portman, Christian Bale, and Tessa Thompson. Do you think that Thor should go vegan? Are you looking forward to seeing Portman take up the mantle of the Mighty Thor? Let us know in the comments below.