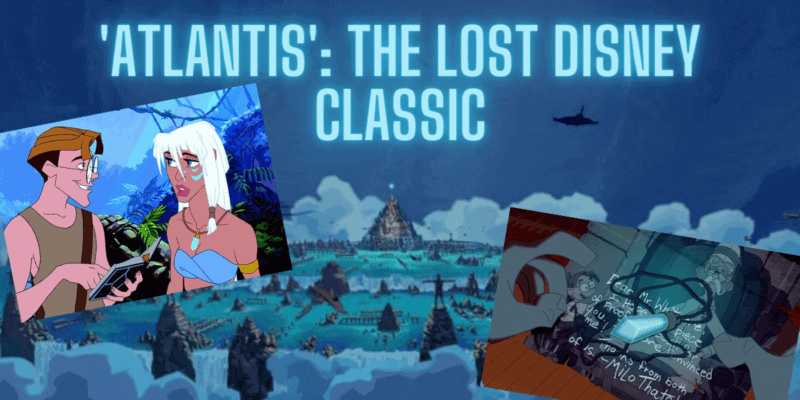 Do you dream of lost civilizations, just waiting to be found? Have you found yourself wishing for magic jewelry that can breathe life into you and your fellow citizens? Would you like to go on an adventure with a talented-yet-awkward team of misfits? If so, you are probably a fan of Disney’s Atlantis: The Lost Empire – or you should be.

This film follows cartographer turned adventurer Milo Thatch as he continues the legacy left by his grandfather: the search for Atlantis. He joins up with a team and some generous funding to discover the lost empire. While there, he finds more than he bargained for: a fully functional society of Atlanteans who have been alive for hundreds of years, led by Princess Kida and her father. Certainly, something mysterious is going on and Milo must contend with his fellow men and supernatural forces to figure it out.

If you haven’t seen this movie, go watch it then come back to read to avoid spoilers. If you have seen this Disney movie, you may have noticed it stands apart from other films of its time. From a dark age of Disney films, Atlantis features a diverse cast of characters and a multi-cultured approach to an epic odyssey through the lost kingdom. Journey with me to find out why this underrated Disney film is actually a lost Disney classic.

This film is commendably diverse in its characters. It features a cast of characters from multiple ethnicities and cultural world-views including African American and Native American medic Dr. Sweet, Lieutenant Helga from Germany, Puerto Rican mechanic Audrey Rocio, French geologist Mole, and more. The cast also features adventurers of all ages, such as the seasoned cook “Cookie” or the sarcastic radio operator Wilhelmina Packard. I love that this movie features a variety of strong women – from heroes to villains, from adventurers to princesses. The film showcases the ability of people from diverse backgrounds to come together to discover and learn – then save an entire kingdom.

Atlantis: The Lost Empire does not hesitate to conquer serious global issues, such as warring cultures and the evils of imperialism. What is imperialism? Imperialism is the expansion of one country’s power through expansion into other countries. Sometimes this expansion happens slowly through imposed policies, but sometimes it happens through military force. The kingdom of Atlantis feels the threat of this imperialism through violent threats by Commander Rourke’s band of mercenaries. Also, the film acknowledges that the team with Milo were all willing to give in to this dark imperialism for money. This diverse team changes their mind and helps Milo fight with the Atlanteans for their rights. How amazing is it that we have these imperfect, diverse role models to look up to? Seriously, I love that the adventurers can empathize with the Atlanteans and then change their minds to help preserve their rich culture. The Disney film has these complex themes in a child-friendly package that the whole family can love!

Ok, so I must admit: Kida is one of my favorite Disney characters of all time. Why? Because, Kida is not only a strong, amazing woman, but she paved the way for the modern Disney princess. Hear me out. Kida may not be as popular as other princesses, but this is likely because her film was surrounded by a tragic procession of less-than-stellar Disney films. She is years ahead of her time. Kida is a strong, mystic woman who protects her people. Sound familiar?

I would compare Kida to many more modern Disney princesses, including Rapunzel, Elsa, Anna, Tiana, Merida, and Moana. Kida is alive due to supernatural forces, and lives in a mystical world. This is very similar to the magical challenges that Merida and Moana rise to meet in their movies. Kida welds elements around her when possessed by the Heart of Atlantis. Though not born with supernatural abilities, she controls the environment around her, much like Rapunzel or Elsa use their superhuman abilities! In addition, Kida also welds the fantastic weapon of intelligence, like all the modern Disney princesses, especially the witty Tiana. Kida can speak every language the adventuring party asks of her. She also seeks to learn the secrets of her kingdom’s past, much like Anna and Elsa in Frozen 2. Kida is a well-rounded, strong woman who makes a fantastic princess — and eventually queen — role model for girls or women anywhere.

Kida isn’t the only part of this film that was leaps ahead of its time. The animation of the film awes classic Disney fans with its beautiful aesthetic. The combination of CGI and traditional hand drawn animation mingles in a magical, amazing collection of landscapes and action scenes. The whole film has a steampunk vibe. Yet, this steampunk look pairs with glowing blues and grays, giving both a calming effect and an aching for adventure. The crystals in this movie stand out as the iconic props. The crystals even match the modern aesthetic of boho or VSCO girl fashion statements. And yes, this is me hoping that this aesthetic inspires some stylish fashion jewelry. Either way, you’ll catch me wearing my Atlantean crystal-looking necklace, still admiring the animation of the film on my umpteenth watch.

Atlantis accomplished a strong aesthetic, but this aesthetic wouldn’t mean much if its world wasn’t spectacular. But it is! Atlantis: The Lost Empire excels at world building. As in, the film is so good at world building that you just want to go back and visit its universe again. Though the sequel was a disappointment in its direct-to-video format, the original film created an epic world that fans will want to revisit on many, many rewatches to come. This animated film is epic. The epic adventure across the world discovers an ancient, magic civilization, combining traditional storytelling conflicts of man versus man and man versus supernatural. This masterpiece incorporates a Disney princess story without using a typical princess – in format or in character.

This epic Disney movie has romance, adventure, story-telling, humor, diversity, and more – but it was just in the wrong place at the wrong time. This movie is one of Disney’s only cult classics, earning the love it receives from its dedicated – if small – fanbase. The aesthetics and diverse cast of characters provide it with a staying power found in Disney’s animated classic films. If this movie had happened later in Disney’s history, it would have been a classic among modern masterpieces. However, since it occurred in a dark age of Disney, this movie is and always will be a lost Disney classic.

Do you think Atlantis: The Lost Empire is a lost Disney classic? Let us know in the comments!

Comments Off on ‘Atlantis’: The Lost Disney Classic