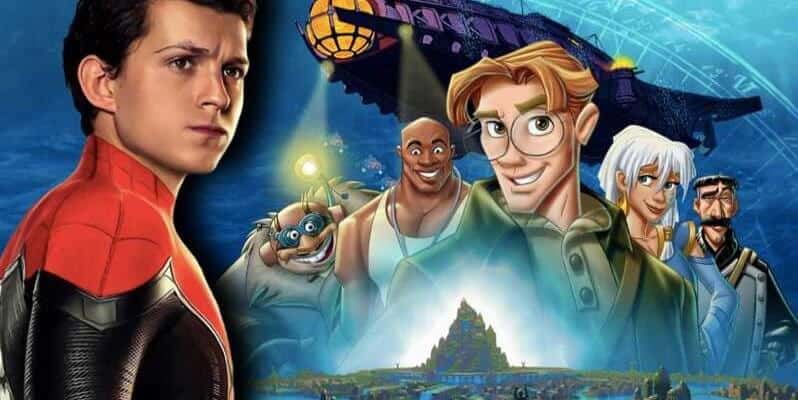 ‘Why remake Mulan or Beauty and the Beast? Remake an underrated classic like Treasure Planet or Atlantis: The Lost Empire‘. We even included both films in our list of underrated Disney gems that deserve a live-action remake.

That picture of the dream cast featuring Tom Holland, Danny Devito, Michelle Rodriguez, and Terry Crews among others has been circulating for years. And years. The Disney community has been desperate for Walt Disney Pictures to finally remake this forgotten fan favorite.

Disney’s Atlantis: The Lost Empire to be remade in live-action with Tom Holland

According to a source at The Illuminerdi, a live-action remake Disney’s Atlantis: The Lost Empire is in the early stages of development by The Walt Disney Pictures.

It follows Disney‘s live-action remakes Aladdin and The Lion King excelling at the box office. The latter was so successful that a live-action Aladdin sequel has even been announced.

The source also says that Marvel Cinematic Universe star Tom Holland is set to star in the live-action remake as Milo.

Atlantis: The Lost Empire to get a live-action remake

Atlantis: The Lost Empire was an underrated Disney movie released in 2001. Though the film didn’t quite get the box office numbers that Disney was looking for, it’s since become a cult classic movie.

The Disney animation classic features Milo (Michael J. Fox) discovering the lost world of Atlantis. He and his team of daredevil explorers meet the Atlantean people and eventually become entangled in the fate of their world.

Disney fans across the board have cited their love for this amazing animated movie, and Milo’s return to the big screen has been hotly anticipated since Disney started its trend of live-action remakes of each (and seemingly eventually, all) animated movie.

The movie was highly praised by Disney fans for its distinctive style, and it was widely thought of as an animated classic. It eventually spawned a sequel, Milo’s Return in 2003, which truth be told feels more like a pilot to an Atlantis: The Lost World tv series.

So, it seems that the fate of Atlantis will be decided once again in a live-action remake of a classic Disney film. It seems that all Disney classics are set for a live-action remake, especially after the announcement of a live-action Hercules and The Little Mermaid and the rumor of a Robin Hood remake. As for whether Holland will actually play Milo, that remains to be seen. It’d be great to see a fan-favorite character get the right treatment; being played by Disney‘s hottest film star.

Which Disney animated film would you like to see get a live-action remake? What is your dream cast for the Atlantis remake? Let us know in the comments below.