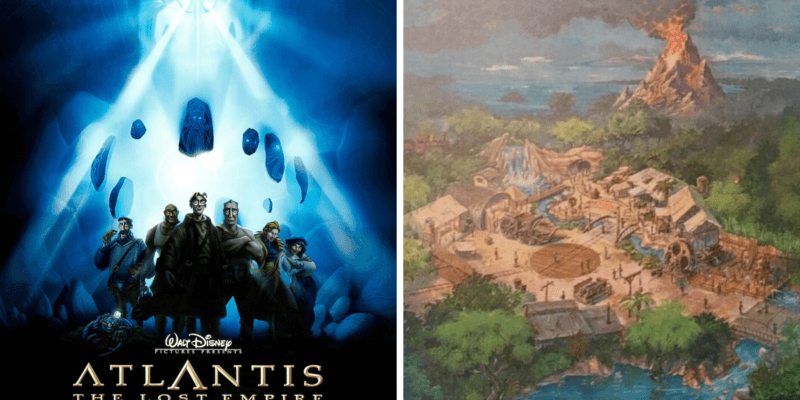 Once upon a time, Walt Disney Animation embarked on a brief experimental phase where they left the musical-theatre-esque formula of the Disney Renaissance behind to try something else. And the movie leading that experimental period was Atlantis: The Lost Empire.

Like all the movies that followed it (i.e. Treasure Planet) Atlantis drastically underperformed, and the results from that period would lead Disney Animation back to the formula for what is now known and the Disney Revival.

But it turns out Disney had big plans for Atlantis, and if the film had been the hit they wanted, it could have changed Disney forever. Not just regarding the movies, but in the parks and TV as well. Here are three of the most significant ways that could have happened.

“We wanted to make an Adventureland movie instead of a Fantasyland movie.” –Director Kirk Wise

After the completion of The Hunchback of Notre Dame, producer Don Hahn gathered the directors, Kirk Wise and Gary Trousdale, and writer, Tab Murphy, to come up with something new.

“Don made it clear to me and Gary that if we wanted to work on another project and work with the same team, we had to come up with a project right away,” Wise and Trousdale told Collider. “It was Don Hahn who pulled us together and said, ‘You’ve done a couple of movies, the studio is happy with you now, this is your chance – if we want to do another movie together, keep the crew together, and do something that we want to do, we’ll have to sit down and think of it or the studio is going to tell us what to do.’”

They knew they wanted to steer away from the big Broadway-style films like The Little Mermaid and Beauty and the Beast, and, in Wise’s words, “make an Adventureland movie instead of a Fantasyland movie.” When Artistic Supervisor John Stanford joined the team after finishing Mulan, he said, “It was unlike anything I’d ever heard of.”

In its early stages of development, Atlantis had a much stronger edge to it on top of its originality. Including more monster sequences and more gun-slinging action. But certain circumstances caused the team to dial back on the intensity.

After Columbine, crew members wondered if the movie was too intense. The adventure remained but the man-eating monsters and muscular shootouts became a causality of the process. (Watching the movie now, the most striking thing is that one of the characters smokes cigarettes throughout the entire movie.) “The hard edges got rounded off little by little, just because the company was used to making a certain type of film. And there were certain aspects of storytelling that made people at the time really nervous,” Sanford said. There were certain realities, too, that the production needed to face. “We were aware it had to be a Disney movie, PG or less,” said Hahn, acknowledging that the throughout the process “the edges do get knocked off.”

But there was still much excitement for the film, its story, its new comic book style, and its characters. And more “Adventureland Films” were added to the pipeline like Treasure Planet. And there were even plans for an Atlantis sequel. Trousdale and Stanford were convinced that if Atlantis had been popular enough, Disney animation would have continued in that direction.

“That was the hope. That was what we thought might happen,” Trousdale said. “Disneyland has a whole land dedicated to this kind of thing, why not go there?” Sanford agreed. “We would have made more movies inspired by Adventureland. I think that was the moment. There’s an alternate reality somewhere where Atlantis hit with the public,” Sanford said. “And Disney is making a different type of movie. They’re always going to make musicals but I think there’s another kind of movie they could have been involved with.”

As work continued on Atlantis, excitement for this whole new animated motion picture was growing elsewhere in the company. Including Imagineering.

There was an idea to re-theme the submarine voyage attraction at the Disneyland Resort in California to be themed after Atlantis: The Lost Empire.

“Gary, Don and I had the pleasure of going to Disneyland after hours to the submarine attraction, covered up by barricades and scaffolding and going into one of the submarines and looking at a demo of what was to be, at the time, a planned retrofit of the submarine ride. The voyage was going to be narrated by Preston Whitmore. There would have been an encounter with the Leviathan. Other characters were going to make appearances by squawking in on the intercom. It was going to be much more focused around mystery and adventure and excitement, rather than a casual tour of underground ruins.”

“They were going to retool the sub to make it look like the [expedition’s submarine] Ulysses,” Trousdale said.

There was also an attraction planned for Magic Kingdom in Walt Disney World. The plot was pitched as the following:

“To prove the world that Atlantis is real, Whitmore Industries has created an amazing transportation system that not only retraces the original route of discovery but enlists the experienced help and expertise of some of the surviving members of the first Expedition.”

“They had a whole ride system that they had acquired that was basically a rollercoaster that you would hang from like you were on a hang glider. You’d hang from your back with your stomach facing the earth and the track above your head. In a sense it would duplicate the sensation and the design of the gliders that are used in the final battle of the movie. That was going to take you through the exploding volcano and various other scenarios but it was going to be a flat out rollercoaster thrill ride incorporating this new ride system.”

The new “Fire Mountain” attraction would have been incorporated into Magic Kingdom’s Adventureland.

Around the same time Disney was trying to figure out how to incorporate this epic adventure into the theme parks, there was also work being done on a spin-off TV series that featured Milo, Kida, and the other expedition survivors going around the world exploring ancient civilizations.

“They were going all over the world and checking out all the different things that were offshoots of Atlantis,” Trousdale said. “They played with the idea that we’d planted, which was that Atlantis was the cradle of all civilizations and everything spun off from there and they were going to all of these different places.”

It was even reported that there was going to be a crossover with Disney Channel’s Gargoyles.

Alas, none of these changes ever came to be. The first few episodes of the Disney Channel series were blended together for the straight-to-video sequel, Atlantis: Milo’s Return. Disneyland’s 20,000 Leagues attraction is now themed after Disney-Pixar’s Finding Nemo. The project for Magic Kingdom was completely shelved. And Walt Disney Animation went back to making (mostly) musicals.

According to Wise it all came crashing down starting opening weekend:

“Everybody had the best intentions, the studio really supported the movie, I think they marketed it very well but even the best intentions can’t make up for the fact that if you release the movie and people don’t go. All the spin-offs and rides and comics and things that were planned for the movie, those get wiped off the table in one stroke.”

But Disney’s Adventureland movie has lived on as a cult classic, and it has hope for new life as Disney reportedly begins work on a live-action remake with Tom Holland taking up the role of Milo Thatch.

What did you think of Atlantis: The Lost Empire? Do you wish it had an attraction in a Disney park? Let us know in the comments!