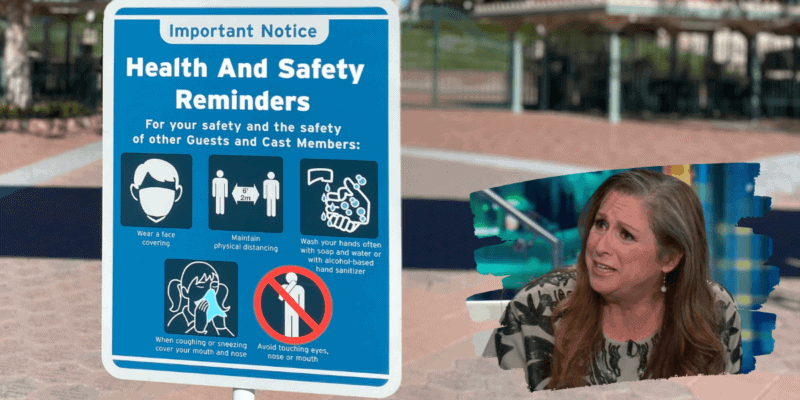 Heiress to The Walt Disney Company and Roy O. Disney’s granddaughter Abigail Disney is once again speaking out about the company’s practices. This time, she’s sharing why she believes the company was unprepared for the current pandemic.

As COVID-19 spread throughout the past year, the virus began detrimentally affecting individuals, families, and businesses small and large all across the globe. These times are unprecedented, and as Abigail Disney acknowledges, no company could have predicted the storm that has been COVID-19. Among the companies hit the hardest was The Walt Disney Company, which, like others, is still trying to recover amid a pandemic that continues to ravage the world.

By Spring 2020, 100,000 Disney employees were furloughed across the entire company. And at this time, tens of thousands of Disney Parks employees across Disneyland Resort and Walt Disney World Resort have been laid off. Disneyland Resort remains closed, Disney Cruise Line has not yet resumed operations, and a few Disney Parks around the world have had to re-close after reopening their gates.

But, according to Abigail Disney, The Walt Disney Company didn’t have to suffer this much as a result of the ongoing pandemic. The filmmaker and social activist believes that the company’s prioritization of shareholders is what has led to its suffering. She explained this in an interview with TheWrap’s founder and editor-in-chief, Sharon Waxman, during TheWrap’s Power Women Summit on Wednesday.

“If they had been less motivated by simply pushing profits to shareholders, but rather to stakeholders, their employees wouldn’t have had to run to food banks quite as quickly,” Abigail Disney shared. “They might have had the savings to support themselves on and Disney might have had some cash on hand, instead of having to borrow immediately for their needs,” she continued. “So it’s the grasping after profits has left the structures of our society hollowed out.”

She expanded on this, pointing to some of the decisions that former CEO Bob Iger has made. Iger stepped down as CEO — the position is now held by Bob Chapek — in early 2020 and now serves as Executive Chairman.

“So Disney was, before the pandemic, historically profitable, amazingly profitable, extraordinary. And Bob Iger had been an extraordinary manager. He managed the company brilliantly through kind of a transition into the 21st century. So I have no beef with him on the way he’s run the company for profit,” she said. “But I do know that he ran the company with an eye toward share price, and maybe not a lot other than that. He ran the company, making tons and tons and tons of share buybacks, paying out a lot of dividends, when there was an opportunity when they were that profitable to really think about, like, maybe the money should be flooding more widely out across the employment structure.”

The activist and heiress shared that, because of the choices The Walt Disney Company made when it came to prioritizing shareholders instead of the employment structure, the company was “not in a position to handle the emergency well…You keep cash on hand for an emergency; that’s what is for. You can’t predict a pandemic, but you can predict an emergency will happen.”

Abigail Disney has been a critic of Disney company and theme park practices for years. And, especially throughout this COVID-19 pandemic, she has made her views known. In April, she criticized the company for giving executives bonuses as so many employees were being furloughed and going without pay. Then in July, she shared her confusion for the decision to open Walt Disney World Resort in Florida as COVID-19 cases were continuing to rise. She even predicted the layoffs of thousands of employees — and then spoke out against them.

“If Disney had spent more time in Gov Newsom’s office arguing for an extension of unemployment benefits and more rent subsidies instead of opening the parks prematurely and in a way that would risk their employees’ health, I’d be a lot more comfortable with the loyalty to which they lay claim,” Abigail Disney said in September. “If Disney had not spent down every penny of its cash on share buy-backs in 2019 (11.5 billion worth) perhaps there’d have been some dough on hand to ensure that even at a partial level they could continue to keep some of these workers on until things return to normal.”