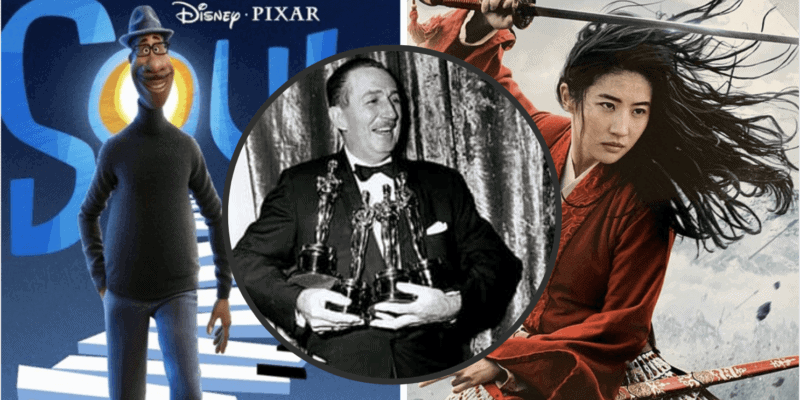 This has been a year the likes of which the film industry has never seen. Even throughout World War II and other national crises, the Academy soldiered on — in some cases literally — and movies were released to theaters.

This year, though, amid the ongoing pandemic, movies did not release to theaters. Instead, they were pushed-back indefinitely or sent straight to streaming platforms, without ever playing on the silver screen.

In a decision made last year, the Academy of Motion Picture Arts & Sciences ruled that films had to have a minimum seven-day run in a Los Angeles-area theater in order to be eligible for nomination, even if they then immediately released to a streaming platform. As per CNBC:

The Academy of Motion Picture Arts and Sciences voted to leave a key rule on eligibility unchanged. The rule allows any film to be considered for an Oscar, so long as they have a minimum seven-day theatrical run in a Los Angeles theatre.

Motion pictures can appear on a streaming service on or after the day of their theatrical run and still be eligible for an award.

“We support the theatrical experience as integral to the art of motion pictures, and this weighed heavily in our discussions,” the academy’s President John Bailey said in a statement late Tuesday.

What did the pandemic change for the Oscars?

Now, however, things have changed. COVID-19 forced the Academy to reconsider its rules and make temporary exceptions. The Academy released this statement on April 28 — well before Walt Disney Studios opted to send both the live-action Mulan remake and Pixar’s Soul directly to the Disney+ streaming service:

The devastating COVID-19 pandemic forced the closure of all Los Angeles County movie theaters as of Monday, March 16, 2020.  Current Academy Awards rules (under Rule Two, Eligibility) require that a film be shown in a commercial motion picture theater in Los Angeles County for a theatrical qualifying run of at least seven consecutive days, during which period screenings must occur at least three times daily.  Until further notice, and for the 93rd Awards year only, films that had a previously planned theatrical release but are initially made available on a commercial streaming or VOD service may qualify in the Best Picture, general entry and specialty categories for the 93rd Academy Awards under these provisions:

On a date to be determined by the Academy, and when theaters reopen in accordance with federal, state and local specified guidelines and criteria, this rules exemption will no longer apply.  All films released thereafter will be expected to comply with the standard Academy theatrical qualifying requirements.

What does this mean for Mulan and Soul?

Now that the powers-that-be at The Walt Disney Company have decided to release two films originally slated for theatrical release to Disney+ instead, this change to the 2020-2021 Oscars rule will be significant for Disney fans. Soul, of course, does not debut until Christmas Day, but Mulan released on Disney+ months ago.

Although Mulan did meet with some backlash, it also earned more than Warner Bros. Tenet, which released to theaters and may, in this strange year, actually be an Oscar contender. As The Playlist pointed out:

…[this is] an awards season that is already stressing out studios and consultants because it all simply, “unknown.” Will “Mulan” play just as well on the Academy’s television screens as it would on a big screen? Can a potentially less competitive field bump “Mulan” from a fringe player to a film with a legitimate shot at a nod? There’s too much at play to even guess. No box office, likely no official streaming numbers and no in-person events (at least not yet) for Disney to campaign it. But as 2020 has proved, surprises are always around the corner.

Liu Yifei was impressive in the title role as Disney’s warrior princess and director Niki Caro did an excellent job overall, but as The Playlist assessed:

…for the most part she successfully brings her [Niki Caro] own eye to the project. Does that really put Caro in the mix for a Best Director nomination? Potentially, but it’s the screenplay from four credited screenwriters that hinders her chances. The movie is just a little too wonky and slightly choppy at moments when it could breathe a bit more.

Disney-Pixar fans have not yet had the opportunity to watch Soul, but it promises to have an incredible soundtrack — the score was composed by Trent Reznor and Atticus Ross (Nine Inch Nails) alongside Julliard School graduate Jon Batiste — that could immediately move it into Oscar territory, particularly in this year with less competition than usual.

With a rare “100% Fresh” Rotten Tomatoes rating so far, some film fans might even be thinking that Soul could find itself with a Best Picture nod this year.

It is worth noting that all three animated features that have ever been up for Best Picture (none have won yet) have come from Disney and Pixar — Beauty and the Beast (1991), Up (2009), and Toy Story 3 (2010) — so a Soul nomination would not be shocking.

What do you think will happen with Mulan and Soul at the Academy Awards in 2021?