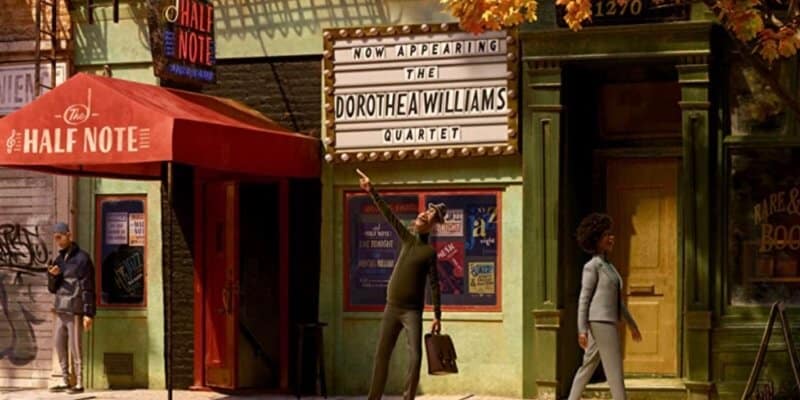 Disney and Pixar’s highly anticipated film Soul will be released on Christmas Day of this year on Disney+. And although we’ve seen some great visual stills and trailers for the film, we haven’t gotten to the “soul” of the movie — the music!

During a press event, we here at ITM got an exclusive look into what the inspiration was behind the music. While developing the characters, Pixar’s Peter Docter, explained how they needed to tie title character Joe Gardner to some kind of passion. Docter said that the creative team was trying to come up with something that, “showed the promise of life, some passion that he had”.

That’s when someone in the room brought up a video of a Master Class by jazz legend, Herbie Hancock. In the video, Hancock tells a wonderful story about a moment he has performing with another musical legend, Miles Davis. He recalls:

“I had the great experience of, uh, working with Miles Davis where I played something that was… you could say technically wrong, and it was in the-the middle of a concert that was the best concert of that tour. We were havin’ a great time. And in the middle of one of the songs, during Miles’ solo, I played this chord that was so wrong. I thought I had destroyed everything and reduced that great night to rubble. Miles took a breath, and he played some notes, and he made my chord right”

“It took me years to figure out what actually happened.  Here’s what happened.  I judged what I had played.  Miles didn’t.  Miles just accepted it as something new that happened, and he did what any jazz musician should always try to do, and that is try to make anything that happens into something of value.”

Docter elaborated that even though this is a great story of two musical legends, it serves as a metaphor for life. That’s when they realized that jazz was what the film was missing to say everything else the creators wanted to convey.

Jazz extraordinaire, Jon Batiste, provided the original jazz arrangements and compositions for Soul. He even wrote an original song for the film’s soundtrack titled “Born to Play”. When it came to developing an all-over sound and tone for the film, Jon has this to say:

“It’s a lot of light and-and life force energy, I like to call it, and that was really the-the beginning of me figuring out my way into the music, the jazz music, in the film, findin’ the-the tone, the spiritual tone.  The film has this ethereal air because it’s going between the real world in New York City and, um, the-the Great Beyond, which is where souls are born, and where they figure out their purpose, and where the-where souls go once a person’s soul leaves their body in their death.”

Here’s a little taste of what we can expect when it comes to music for Soul. Here is Jon Batiste performing “Born to Play” in a video from Disney.

Jon expressed how grateful he is to have worked on this film. He expressed:

“And people need light in this time, and I’m all about bringin’ the light, and that’s one of the great pleasures of workin’ with Pixar.  They-they-they’ve created these films that delve into all of the cultures of the world and create it in a way where it’s accessible to all people.  It doesn’t matter where you’re from or what your experience.  The-the stories are-the-they transcend all of that.”

Disney and Pixar’s Soul will be available to stream on December 25th on Disney+! If you aren’t yet signed up for the streaming service, you can get started by clicking here.

Are you excited to see Soul when it debuts on Disney+? Let us know in the comments below.