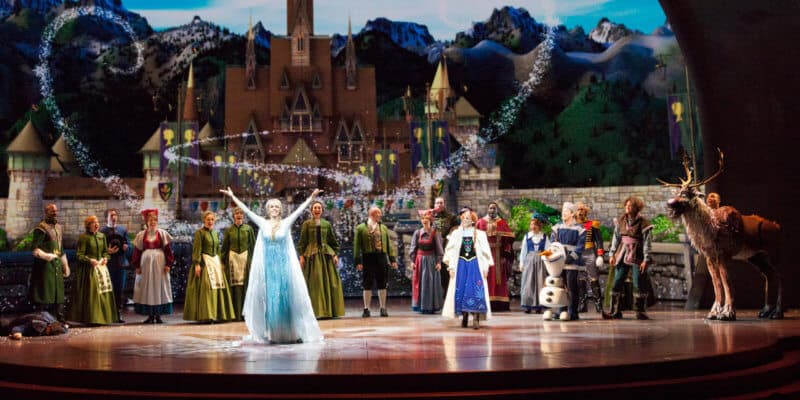 As a result, numerous live entertainment options have been unavailable. Earlier this year, Walt Disney Company officials confirmed that performers from two of Disneyland’s most popular offerings — Frozen – Live at the Hyperion and Mickey and the Magical Map — had received end-of-run notices.

Here, we take a look at what we think could replace this live entertainment at Disney’s original California Resort.

The original performances could return.

One possibility — arguably the one most Disneyland fans are hoping for — is that both Frozen – Live at the Hyperion and Mickey and the Magical Map could return. Disney has issued end-of-run notices before and ultimately brought the performances back.

Mickey and the Magical Map debuted at Fantasyland Theatre at Disneyland Park on May 23, 2013. The official webpage for the 25-minute performance has been taken down, but the Disney Fandom Wiki shares this description:

The story begins with Mickey once again in the studio of Yen Sid [from Fantasia], as a team of mapmakers puts the finishing touches on an enormous map using giant paintbrushes. Trouble ensues when the mapmakers quit for the day, leaving a curious Mickey alone in the studio with a nearly complete map capable of taking dreamers to any place imaginable. Before long, a paintbrush-wielding Mickey is absorbed into the world of the animated painterly map (an ingeniously disguised LED screen spanning the width of the stage, along with a trapdoor to initiate the shrinking effects). His nemesis throughout the story is an amusing and stubbornly unfinished portion of the map named Spot.

One of the most famous musical numbers in the Disney stage shows featured The Princess and the Frog’s Princess Tiana in New Orleans.

Frozen – Live at The Hyperion features the whole Frozen cast — Anna, Elsa, Sven, Kristoff, Olaf, and more — recounting the popular tale from the first Frozen movie. The set features Broadway-style sets, costumes, and musical numbers and typically draws massive crowds. It features all of Frozen’s most iconic songs, including Elsa’s Let It Go and For the First Time in Forever.

Although Mickey and the Magical Map was a fun, colorful, popular stage show, it does seem — simply due to the sheer popularity of the Frozen franchise — that is is more likely to be replaced than Frozen – Live at The Hyperion. Some, however, believe that the fact that the Broadway version of Frozen will be touring in the near future means that another show is rife to replace it at Disney California Adventure Park.

The Hyperion Theater at Disneyland Resort is located very near the area where Marvel characters — including Captain America, Spider-Man, and Captain Marvel at Hangar 12 — typically do meet-and-greets with Guests in non-pandemic times.

Related: Has the First Avengers Campus Entrance Been Revealed?

We do know that Disney was recently casting for a Marvel show, although it was presumed to be for the upcoming Avengers Headquarters at Disney California Adventure’s Avengers Campus expansion. There is, however, a possibility that some performers could also be used for a Marvel show at The Hyperion.

OC Register made this point about the potential for a Marvel-themed stage show at Disneyland:

A Disney theme park version of “Spider-Man: Turn Off the Dark” would be an intriguing idea for the Hyperion. Disney and Marvel kept a respectful distance from the expensive and star-crossed Broadway production.

Finding Nemo – The Musical has been one of Walt Disney World Resort’s most popular stage shows for over a decade. The Disney’s Animal Kingdom performance features colorful, oversized puppets and tells the tale of Finding Nemo, complete with musical numbers that are not in the Pixar film.

This could be the perfect show to fill the vacancy on Disneyland Park’s Fantasyland Theatre stage. OC Register’s article pointed out:

The easiest path for Disneyland would be to bring a Broadway-style musical from another Disney theme park to Anaheim. The top contender: “Finding Nemo” from Disney’s Animal Kingdom. The 40-minute live puppet show has been wowing Florida audiences for more than a decade.

Something from Disney Cruise Line.

Another option would be for Disney to bring a Disney Cruise Line exclusive stage show to either one of Disneyland Resort’s now-vacant stages. As OC Register pointed out:

Another route would be to bring a Disney musical up from the minor leagues. The Disney Cruise Line has a number of Broadway-style shows based on “Hercules,” “Tangled” and “Cinderella” that are primed and ready to step up to the next level at a Disney theme park.

Disney Cruise Line’s performances are spectacular, award-winning shows that draw capacity crowds on the Disney Dream, the Disney Fantasy, the Disney Magic, and the Disney Wonder. Tangled, in particular, is likely to be popular among Disney Parks fans, who have long wanted an attraction featuring Rapunzel, Flynn, Pascal, and the entire Tangled gang.

After Disneyland Resort reopens its theme parks, we aren’t sure how long Guests will have to wait for live entertainment to return to Disneyland and Disney California adventure. But as soon as Disney provides any updates, we’ll share the news on our website.

What do you think? Should Disney bring back Frozen and Mickey and the Magical Map or try something new entirely on these Disneyland and Disney California Adventure stages?