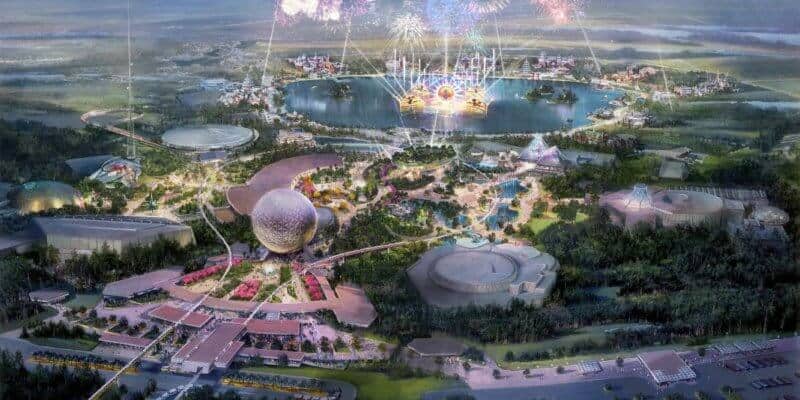 Now, a new permit has been filed for ‘Project Gamma.’ This is the Imagineering Department’s codename for the EPCOT entrance overhaul [pictured above], which includes the new World Celebration neighborhood.

This particular permit is specifically for “Project G: 202-1” and lists the address 1400 Avenue of the Stars. This is the location of the former Innoventions East structure, which was previously home to the now-defunct Mouse Gear store and Electric Umbrella quick-service restaurant.

The Whiting-Tuner Contracting Company is the contractor on this new EPCOT construction permit. Their website indicates that they are a full-service construction firm, specializing in innovative designs that exceed clients’ expectations.

It is likely that they are set to begin work on transforming the Innoventions East area into a brand new Disney World dining establishment and retail shop — these are intended to provide similar services to Mouse Gear and Electric Umbrella, but with completely new themes and designs.

EPCOT’s new Starbucks location will also be located in this complex.

Although Disney Parks executives have not yet announced an official end date for EPCOT’s many construction projects, they have already unfortunately been delayed due to the coronavirus. Much of the major work is expected to be completed ahead of Disney World’s 50th Anniversary Celebration in 2021, but Inside the Magic will update you as we get new information regarding the EPCOT construction.

Officially called “The Most Magical Celebration on Earth,” this event will encompass all four Walt Disney World Resort theme parks — Magic Kingdom, EPCOT, Disney’s Animal Kingdom, and Disney’s Hollywood Studios — and will celebrate the magic that Disney World has brought to generations of families.

Are you excited to visit the reimagined EPCOT?

Comments Off on EPCOT Project Codenamed ‘Gamma’ Gets New Permit