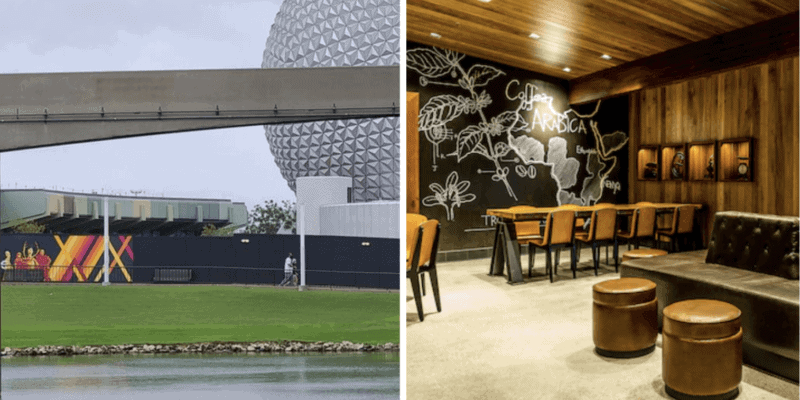 Electric Umbrella, once a counter-service restaurant in EPCOT’s Future World area, officially closed over six months ago as part of the EPCOT theme park reimagining.

For quite some time, however, remnants of the building, including the umbrellas on top of it, remained visible to Guests at the Disney park. Now, demolition of the former Electric Umbrella space is underway.

In this photo, the construction on the site is clearly visible. A colorful “Explore Our World Showcase” wall has been installed outside of the building until the renovation is complete.

A new EPCOT Starbucks location and another, as-yet unannounced quick service restaurant will occupy the area when the Future World reimagining is complete.

What else is happening in Future World?

Although certain EPCOT construction projects, including the Space 220 restaurant, have been put on-hold, many of the previously announced work in Future World is continuing.

The PLAY! Pavilion, for example, has seen a great deal of progress recently. Located in the new World Discovery area, the PLAY! Pavilion will house interactive experiences for the entire family, including a sketching academy with The Incredibles’ fashion icon, Edna Mode.

The upcoming Moana water attraction is also on-track for its scheduled opening in the new World Nature neighborhood.

The Moana attraction has been described by Disney’s D23 as:

Guests visiting this neighborhood will meet and play with magical, living water, which has a mind of its own in the new attraction Journey of Water, Inspired by “Moana.”

Even though not all of EPCOT’s updates will be ready by Disney World’s 50th Anniversary next year, Guests do have a lot to look forward to, including, it would seem, the brand new Starbucks location!

If you want to plan a Walt Disney World Resort vacation now, contact the experts at Academy Travel can help you with every detail, from choosing an onsite Disney Resort hotel to booking theme park reservations through the new Disney Park Pass system.

Comments Off on Prep For New EPCOT Starbucks Officially Underway