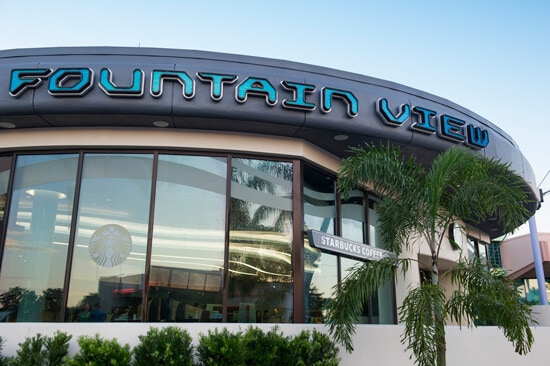 As Epcot undergoes a massive overhaul, many of the restaurants and shops have been undergoing renovations, closures, or temporary relocations. But while popular locations like Club Cool and Fountain View have closed, this month some guest favorite locations are reopening, like the Camera Center and a temporary Starbucks.

The temporary Starbucks at Disney’s Epcot is currently under construction at the Rose Walk, the walkway near Refreshment Port at the entrance to the World Showcase.  It will be a stand much like the outdoor kitchens you can find at the different festivals at Epcot, like the International Food & Wine Festival and the International Festival of the Holidays. From what we can tell, the exterior of the temporary Starbucks stand under construction has a modern look like other Starbucks locations you can find at Disney Springs. It’s been reported that it will open on December 20, but we will update you when we know more information.

While it looks like this will be a temporary Starbucks location, the structure being constructed looks a lot like it could be permanent, should Disney decide to go in that direction. If you’re familiar with Joffrey’s Coffee and Tea, the official coffee provider for the Disney Parks and Resorts, Joffrey’s has stands throughout all four parks in Walt Disney World. So we wouldn’t be surprised of the Starbucks at Epcot was permanently a stand just like Joffrey’s is, although nothing has been confirmed — a larger store like before would definitely be successful. Keep in mind, however, that there still isn’t a page on the Walt Disney World website dedicated to Starbucks at Epcot, ever since the Fountain View webpage has been taken down.

In addition to the temporary Starbucks coming soon to Epcot, the Camera Center has officially reopened this weekend. Located in what is currently still known as Future World, the Camera Center now has a very sleek, clean, futuristic interior, complete with a pin traders section. The refurbished Camera Center definitely has that retro-futuristic feel that we can tell a lot of Epcot is moving toward with the theme park’s reimagining, and we’re definitely excited to see it as a glimpse of what more is to come to Walt Disney World’s Epcot over the next couple of years.

Be sure to reach out to the Authorized Disney Vacation Planners at Academy Travel to book your trip to Walt Disney World so you can see everything new coming to Epcot! Click here for a free, no-obligation vacation quote from Academy Travel.

Are you excited to finally be able to get your Starbucks coffee fix at Epcot again? Do you plan to head to the Camera Center on your next visit? Let us know in the comments!