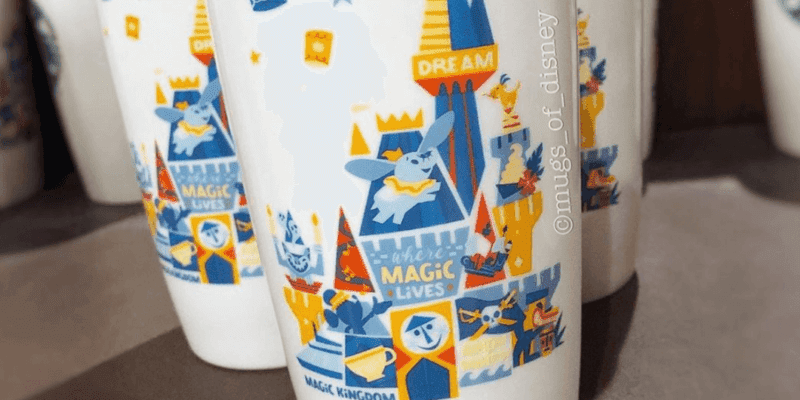 Starbucks and Disney — Is there a better combination?

Walt Disney World has just debuted brand new Disney Starbucks ceramic tumblers and thanks to Instagram user @mugs_of_disney, we are able to get a closer look at the Magic Kingdom one.

The new Magic Kingdom Disney Starbucks ceramic tumbler design is beautiful. At first glance, you will notice that the 2019 mug features the iconic Cinderella Castle, but look a little closer and you will notice a lot more.

Within Cinderella’s Castle, you will notice several other iconic Magic Kingdom icons such as Dumbo, the attraction ship for Peter Pan’s Flight, skull and swords from Pirates of the Caribbean, the Big Thunder Mountain Railroad goat, a delicious dole whip, the famous “It’s A Small World” clock, Space Mountain, a teacup, Tiki drummer, the Haunted Mansion candelabra and of course, Mickey Mouse.

And, to top it all off, you’ll notice Rapunzel’s lanterns are floating over Cinderella’s Castle, too!

Magic Kingdom isn’t the only new Disney ceramic Starbucks tumblers. Epcot, Hollywood Studios, and Animal Kingdom have one as well. Each tumbler features the park icon and within it features other famous attractions and icons within that corresponding park, just like Magic Kingdom.

The Epcot Starbucks tumbler features Spaceship Earth as the main icon and includes Figment, Mission Space, Test Track, The Seas with Nemo and Friends, the Epcot logo, a monorail, The Land Pavilion, Soarin’, Remy as well as some of the famous Pavilions including Mexico, the American Adventure, France, Canada, and Norway.

The Hollywood Studios Starbucks tumbler features the Tower of Terror as the main icon along with Rock n’ Roller Coaster, Fantasmic, Slinky Dog Dash, and the Waldo C. Graphic from Muppet Vision 3D within.

The Animal Kingdom Starbucks tumbler features the Tree of Life as well as the float of Simba from the Festival of the Lion King, Expedition Everest, Dinosaur and some animals such as hippos, a tiger, and an elephant. You’ll also notice the Kilimanjaro Safari vehicle and a giraffe on the top off the tumbler.

If you want to visit Walt Disney World to get your hands on one of the new 2019 ceramic Disney Starbucks tumblers but need helping planning the vacation of your dreams, then don’t hesitate to reach out to our friends, the Authorized Disney Vacation Planners at Academy Travel, for a free quote, today!

Do you like the new 2019 Starbucks ceramic tumbler design?