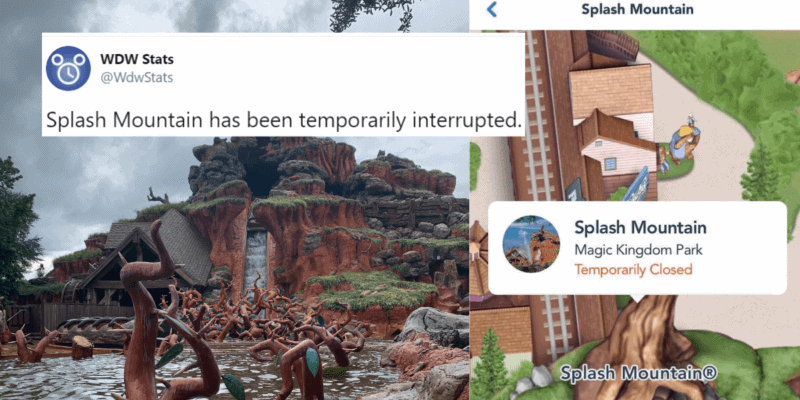 Splash Mountain at Walt Disney World Resort in Florida is currently closed due to technical difficulties.

Inside the Magic confirmed the popular Frontierland ride’s status in the My Disney Experience app (note that the screenshots were taken in PT):

As per Twitter user @WDWStats, this is the third time today Splash Mountain has been temporarily interrupted due to technical problems.

The Magic Kingdom log flume ride went down at 9:20 AM:

Splash Mountain has been reopened after an interruption of 10 minutes. https://t.co/YyI1L7z2gN #MagicKingdom #WDW #WaltDisneyWorld #DisneyWorld

@WDWStats noted that Splash Mountain’s average downtime is about 60 minutes, though with the unpredictable interruptions of this attraction, it’s clearly been difficult to attempt to ride it since Magic Kingdom theme park opened this morning.

Splash Mountain has had its fair share of problems since its upcoming The Princess and the Frog re-theme was announced. A guest inadvertently slipped into the log flume’s canal while being evacuated from the ride, though she was uninjured; a log sank into the ride’s waterway; numerous technical difficulties have arisen; and the goose animatronic fell over just this week.

At this time, we do not know when Splash Mountain will be back up and running today. If you happen to be visiting Disney World, the best way to find out if the attraction is currently available is to check the My Disney Experience app, where all ride statuses are listed at any given time, or ask a nearby Cast Member.

If you are looking forward to Splash Mountain’s renovation, take a look at what Walt Disney Company Chairman of Parks, Experiences and Products Josh D’Amaro had to say about the new Princess Tiana and friends theme for the iconic Disney Parks attraction:

“We actually have been working on it for well over a year. In fact, I was a part of those conversations over a year ago. Listen, our stories evolve all the time. I mean, back from when Walt started Disneyland back in 1955, he stated that if we would continue to evolve our stories, that they’re never ending, that they’ll always be contemporary. And I think that that’s what you’re seeing with Splash Mountain.

I keep using the same word, but I’m really proud of this team and what we’re doing on this front. I think Splash Mountain, no doubt, is a sacred attraction to many of our guests. And I think you’re going to love what we’re doing in making the attraction even more contemporary.”

No timeline for the Splash Mountain re-theme has been announced at this time. It is possible that the project was delayed due to the coronavirus pandemic, although Disney has not made any official statements regarding this.

The Splash Mountain attractions at both Disneyland Resort in Anaheim, California and Walt Disney World in Orlando, Florida are set to be temporarily closed down while they are updated to include The Princess and the Frog characters and scenes.

Tokyo Disney Resort’s Splash Mountain may also be re-themed in the not-too-distant future.

What are your thoughts on Disney World’s continual Splash Mountain problems lately?