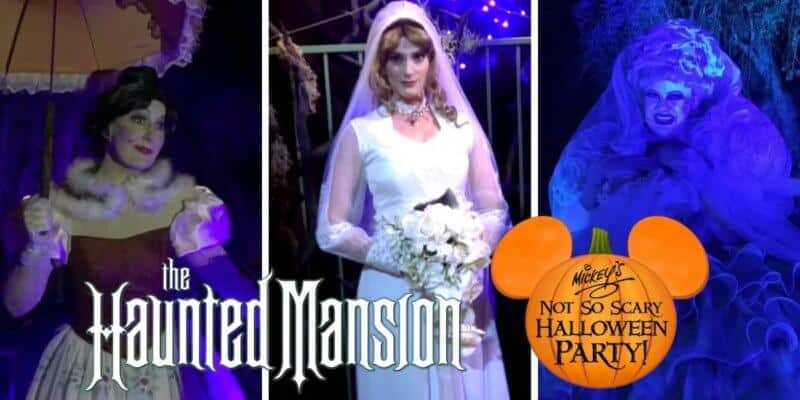 Haunted Mansion is a classic Disney attraction located at both Disneyland and Walt Disney World and has a huge following. Guests travel from all around the world just to experience this beloved attraction.

It’s not just the attraction itself that has a following, but the characters as well! From Constance Hatchway to the Hitchhiking Ghosts — Gus (Prisoner), Ezra (Skeleton), and Phineas (Traveler) — the Haunted Mansion residents are absolutely incredible.

So, how cool would it be if these ghosts came out to actually greet Guests during Halloween season at Disney World and Disneyland? Well, there’s currently a petition going around demanding just that!

Every year for Mickey’s Not-So-Scary Halloween Party (MNSSHP) guests can go into the Magic Kingdom park (dressed up as their favorite Disney character) and do Halloween stuff Go Trick or Treating, Boogie at dance parties, eat snacks and ride their favorite rides, one particular fan favorite Disney attraction- The Haunted Mansion becomes even spookier during the party with scary lighting, a little fog, two Ghostly female residents named, Lady Carlotta and her sister Lady Renata sit outside The Mansion and chat/heckle with guests, even the Cast Members go all-out on spookiness!

But wouldn’t be better if Disney had characters from The Haunted Mansion do Meet & Greets somewhere in front of the ride? Wouldn’t be awesome to have characters like The Hitchhiking Ghosts or The Hatbox Ghost make actual appearances somewhere in the Magic Kingdom park, and have them do spooky and comedic interactions with guests and sign their autograph books?

Wouldn’t it be much more fun for Haunted Mansion fans and Disney fans alike to have Haunted Mansion characters actually come out for Mickey’s Not So Scary Halloween Party and not just for special “Limited Time Magic” events or ride Anniversary’s or Special shows or Promotion of upcoming movies? I think it would be awesome! sign this petition if you wanna see Haunted Mansion characters (The Hitchhiking Ghosts, The Hatbox Ghost, Constance (The Bride), The Ghost Host etc.) for future Mickey’s Not So Scary Halloween Parties.

You can check out the petition here.

This wouldn’t be so far fetched considering in 2016, for a Disney Vacation Club event, the famous tightrope walker from one of the stretching room portraits made an appearance, which you can check out in our YouTube video below.

And in 2019, for the Haunted Mansion 50th Anniversary event, Constance Hatchway did meet and greets at Disneyland park. Check it out in this YouTube video below.

And during the Haunted Mansion “Room For One More” 40th Anniversary Event, Inside the Magic got to see Silas Crump, who is known for working as the caretaker of the Mansion and the graveyard. Crump appears at the gates of the cemetery along with his dog on the attraction.

Additionally, every year for Mickey’s Not-So-Scary Halloween Party, Lady Carlotta always makes a special appearance outside Haunted Mansion. She always tells Guests some of her favorite spooky stories as they wait to ride the attraction. Check out our interaction with her in 2016.

Haunted Mansion already has a huge presence at both Oogie Boogie Bash in Disneyland and Mickey’s Not-So-Scary Halloween Party at Disney World.

Here is an Inside the Magic video of the Frightfully Fun Parade at Oogie Boogie Bash in 2019, in which you can see some of the gravediggers, ballroom ghost dancers, and the hitchhiking ghosts make appearances.

Those same ghosts and gravediggers also appear during the Boo To You parade at Mickey’s Not-So-Scary Halloween Party, which you can see in our YouTube video below.

So, what do you think? Should Disney bring Haunted Mansion characters to the parks for Halloween season? Let us know in the comments below.