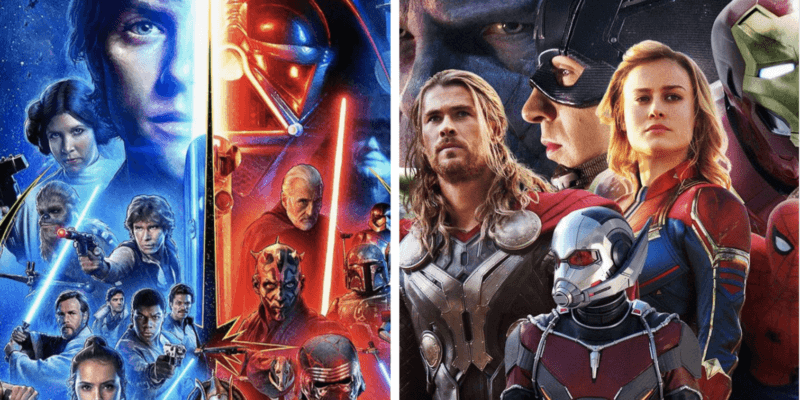 When The Walt Disney Company announced a major, an unexpected, restructuring yesterday, fans and Hollywood were surprised. Disney has decided to streamline its entertainment sector, with its new primary focus being the Disney+ streaming service. This has been a bright spot for the company amid the coronavirus pandemic that has effectively shut down many of their typical other revenue sources.

As per CNBC, Disney CEO Bob Chapek had this to say:

For fans of the Marvel and Star Wars franchises, the Disney restructuring begs the question: What does this mean for the two largest franchises under the Walt Disney Company umbrella?

While the answer hasn’t been officially given, there is a chance that Marvel and Star Wars fans could see original movies coming to the streaming service in the not-too-distant future. Disney and Lucasfilm executives have already been vocal about wanting to add additional Star Wars content, particularly given the success of the hit series The Mandalorian.

They have also green lighted the upcoming Obi-Wan Kenobi series, which will begin filming in March 2021, and the Bad Batch series based off of Star Wars: The Clone Wars.

The team at Disney+ also hasn’t shied away from the Marvel Universe, with both WandaVision and The Falcon and The Winter Soldier confirmed.

ComicBook.com took a look at the possibility of how Marvel and Star Wars Disney+ original movies could come about, noting:

Perhaps this restructuring is what will allow both studios to produce smaller-budget films that have a 90-minute to two-hour runtime for the service. While true blockbusters and tentpole features would still be reserved for theaters, should they eventually reopen, smaller feature films could head straight to the service in a move that’d help beef up the Marvel and Star Wars universes even further.

Maybe on the Marvel side, these features could be reserved for those characters Kevin Feige and company have always wanted to include and something but they have never been able to find a slot. It would be a chance for them to use it and with a smaller budget, it’d be something less risky to usher straight to Disney+.

On the Star Wars end of things, smaller budget movies would allow Lucasfilm and Disney to explore standalone stories, similar to Solo: A Star Wars Story and Rogue One: A Star Wars Story. Filmmakers could even potentially bring Alden Ehrenrich back to reprise his role as Han Solo, a move they’ve reportedly been wanting to make.

Remember, Disney hasn’t confirmed that either of these popular franchises will be getting Disney+ original films, but it is certainly something interesting to consider for the future. It is also important to note that these movies would not replace big budget theatrical releases, like the blockbuster Avengers Infinity War, Avengers Endgame, and Star Wars: Episode IX – The Rise of Skywalker.

What Marvel and Star Wars stories would you like to see told on Disney+?