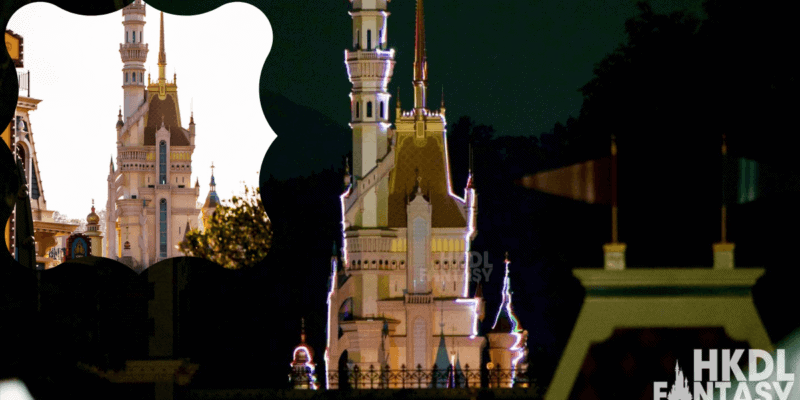 Thanks to HKDL Fantasy, we  have a glimpse of a projection mapping test on the Castle of Magical Dreams. Though we don’t know exactly what Disney has planned in terms of a Hong Kong Disneyland projection or fireworks show, this photo certainly gets us excited for future nighttime spectaculars at the theme park.

Since Shanghai Disneyland and Tokyo Disney Resort have each resumed fireworks shows — and with Magic Kingdom at Walt Disney World showing projections on Cinderella Castle this holiday season — we are certainly intrigued by future projection mapping on the new Castle of Magical Dreams.

Hong Kong Disneyland’s Castle of Magical Dreams is the newly reimagined centerpiece of the theme park. After Disney first announced that Hong Kong Disneyland’s Sleeping Beauty Castle would be getting a major makeover, fans around the world have become excited to see the grand reveal. Construction barriers have been removed within the past week. And it looks as though when Disney finally tells the guards to “open up the gates” (cue “For the First Time in Forever” from Frozen), Guests may finally get to see the castle complete.

Below is the concept art for the castle:

Here is a sneak peek:

And here is the former Sleeping Beauty Castle, for comparison:

Hong Kong Disneyland first reopened back in June after closing in January because of the pandemic. But in July the park re-closed due to another outbreak. Now, Disney prepares to reopen Hong Kong Disneyland once again, and though a reopening date has not yet been announced, work is being done at the park. Disney has begun testing fireworks at the theme park, and the company has also released advertisements to get future Guests excited for the park to open up the gates.

We’ll continue to report on any updates regarding Hong Kong Disneyland operations. And if you want to visit any of the Disney Parks worldwide in the future, click here to book a trip or get in touch with an Authorized Disney Vacation Planner at Academy Travel.

What do you think of the newly reimagined Hong Kong Disneyland castle? Are you excited for Disney to announce their plans for the projection mapping on the Castle of Magical Dreams? Let us know in the comments below!