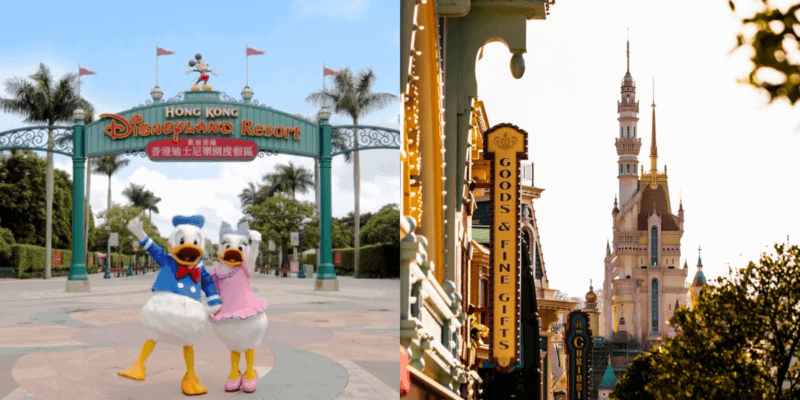 While its gates remain closed to Guests, Hong Kong Disneyland’s construction continues and has reached a new milestone. The construction barriers called the hoardings have been removed from in front of the new Castle of Magical Dreams.

“Let the magic pervade and enchant the park in a whole new world. Official Construction Updates from HKDLR: The hoardings have been removed from the construction site of #CastleofMagicalDreams”

Hong Kong Disneyland’s new Castle of Magical Dreams is the latest addition to Disney’s Castle Collection, replacing the Sleeping Beauty replica that has stood since the resort’s grand opening.

The Hong Kong Disneyland Resort describes its new Castle as the following:

‘This is the first time that an existing castle in a Disney park has undergone a transformation of this scale, in what is sure to be one of the most momentous, highly-anticipated unveilings at Hong Kong Disneyland. The new thematic towers and spires are now in the process of being lifted into the skies and fitted into place onto the castle base.

The castle’s design is inspired by the stories from some of the most iconic Disney Princesses. The re-imagined castle will pay tribute to each of these Disney heroines for pursuing their dreams. The architectural elements embrace the characteristics of each heroine through the interpretation of colors, icons, patterns and cultural features, with uniquely designed towers, turrets and spires dedicated to their respective stories. Guests will be able to recognize the individual elements inspired by their favorite Disney heroines, celebrating a sense of diversity, inclusion and unity.”

This is the latest news to come out of Hong Kong Disneyland involving its brand new Castle centerpiece. After being the second Disney theme park to reopen after the global pandemic, they were once again required to close, posting the following to their website:

As required by the government and health authorities in line with prevention efforts taking place across Hong Kong, Hong Kong Disneyland Park is temporarily closed until further notice. The resort hotels remain open with adjusted level of services. Enhanced health and safety measures that reflect the guidance of health and government authorities have been put in place, such as social distancing measures and increased cleaning and sanitization. We are in contact with health authorities and the government about the situation.

But recently, we at Inside the Magic have shared the news that Hong Kong Disneyland has been seen testing its new fireworks display, giving a sign of hope that it will once again be opening to Guests very soon.

Hong Kong Disneyland has also shown signs that it is ready to reopen stating:

“We welcome the government’s announcement to gradually relax the health and safety measures. Our reopening plan will follow the health authorities’ guidelines in a measured manner.”

It is now a race between Hong Kong Disneyland and the Disneyland Resort in Anaheim, California to see which will be the last Disney Resort to open its gates. The Walt Disney World Resort, Disneyland Paris, Shanghai Disney Resort, and Tokyo Disney Resort are all already reopened.