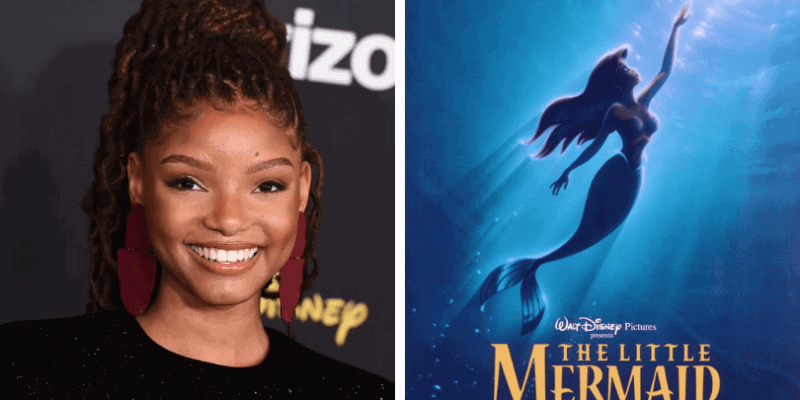 Speaking alongside her sister Chloe, Halle told Cosmopolitan how much her sister meant to her as well as confirming that she’d recently been working on the soundtrack to a major new Disney movie, despite filming being postponed thanks to the coronavirus pandemic. Voice work has already begun.

Speaking to Cosmopolitan about her R&B group with sister Chloe, Bailey reflected on how having her sister with her was a comfort during this crazy time. Chloe reportedly stayed with her during the first three months of filming which took place in the United Kingdom. Halle said;

‘Whenever we’re apart, I feel like my right arm is missing. I say this all the time: I’m not sure what I would do if I was by myself going through this whole thing … Whenever individual opportunities come, it’s exciting because when one of us wins, the other one does too.’

The actor/singer then confirmed that despite filming being postponed thanks to the global pandemic, she has still started the recording process for the Little Mermaid soundtrack. In terms of Disney movie soundtracks, The Little Mermaid is up there as an undisputed fan favorite along with the Mulan soundtrack and others like The Lion King. It’s always interesting to see how the filmmakers change (or don’t change) the orchestrations in a live action remake of a Disney musical.

As for Bailee, this future Disney Princess has already received a lot of attention simply by being cast in the role. Ariel is undoubtedly a Disney legend in terms of beloved characters and it’ll be cool to see how Bailey takes her in a different direction in the live action remake.

Remember that this animated classic is the film that kick-started the Disney renaissance, so there’s certainly an expectation for it to be great, especially after the lacklustre reception of fellow animated classic Beauty and the Beast (2017).

Related: Disney Reportedly Has a Live-Action ‘Digimon’ Movie in Development

The actor/singer went through a rough time after it was announced she’d been cast as Ariel. Twitter was flooded with #NotmyAriel posts that must’ve been very hard for the young star to see. She gave a graceful response shortly after and was defended by a number of big stars including Halle Berry, fellow Disney star Auli’i Cravalho and original Ariel Jodie Benson.

Regardless, I for one can’t wait to hear Halle’s new take on the iconic Little Mermaid soundtrack by Alan Menken and Howard Ashman; each song is a classic!

With her amazing voice, the Grammy nominated artist is bound to nail ‘Part of Your World’ and every other song. Let’s hope we get a taste of that soundtrack in the near future. The Little Mermaid remake is due to release (at the moment) on November 21, 2021. The live action adaptation stars Halle Bailey, Jacob Tremblay, Daveed Diggs, and Melissa McCarthy as the sea witch Ursula. More on the cast as it’s revealed.

Related: There are 48 Oscar Winning Movies on Disney+; Here’s Where to Start

Comments Off on Halle Bailey, Cast set to Record ‘The Little Mermaid’ Soundtrack