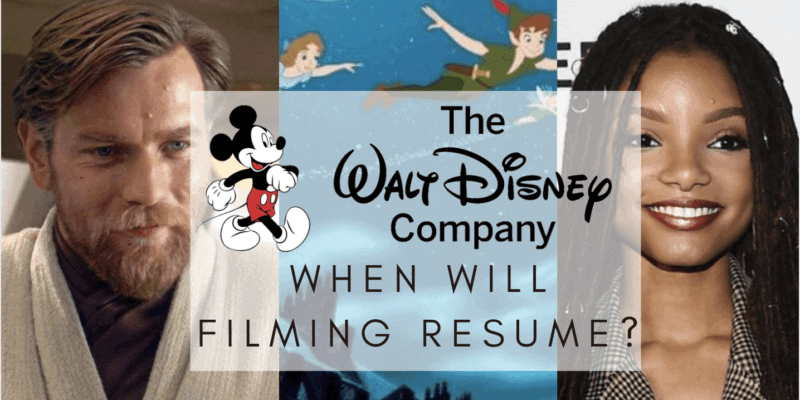 Ever since Walt Disney Studios postponed production on all of their upcoming films (live action and animated), movie buffs have been wondering when production will resume on highly anticipated new Disney movies, such as the live-action remake of The Little Mermaid and Shrunk, a new Honey, I Shrunk the Kids sequel.

Now, we have some information about when popular filming locations, such as Pinewood Studios just outside of London, may allow production companies, such as the Walt Disney Company, to resume filming.

Here, we break down when popular upcoming Disney films might be allowed to start shooting again by location.

As we recently reported, Avatar franchise director James Cameron did not believe Avatar 2’s scheduled release would be negatively impacted by the recent production shutdown.

Two days ago, producer Jon Landau confirmed on his Instagram that the Avatar 2 cast and crew will be returning to New Zealand for shooting next week.

Landau said, “Our Avatar sets are ready — and we couldn’t be more excited to be headed back to New Zealand next week. Check out the Matador, a high speed forward command vessel (bottom) and the Picador jetboat (top) — can’t wait to share more.”

Our #Avatar sets are ready — and we couldn’t be more excited to be headed back to New Zealand next week. Check out the Matador, a high speed forward command vessel (bottom) and the Picador jetboat (top) — can’t wait to share more.

From Landau’s social media post, it appears that the Avatar sequel will be the first of Disney’s major motion pictures to resume production.

Georgia is a movie and television show production hotbed in the United States. The Walt Disney Company frequently films in Georgia, most recently shooting the upcoming 2021 Jungle Cruise movie featuring Dwayne Johnson in the Southern state.

Numerous Marvel films have also been shot at production studios in Georgia.

The Disney+ Marvel series all about Loki is also rumored to be filming at Atlanta’s Pinewood Studios location.

All cast and crew members will be encouraged to follow “best practices,” including wearing masks off-camera, social distancing, regularly hand washing, daily temperature checks, and virus testing. Furthermore, the Governor is asking that Disney and other production companies limit the number of cast and crew members on set at any given time.

Movies and TV are a major part of Georgia’s economy, providing $6.5 billion to local economies in 2019 alone.

Disney has not officially announced when they will begin shooting in Georgia studios again.

Many of Walt Disney Studios’ upcoming movies and Disney+ projects are set to film at the Pinewood Studios location near London.

Feature films The Little Mermaid and Peter & Wendy, along with upcoming Disney+ show Pilgrim, the Obi-Wan Kenobi series, were all just days away from officially beginning production when the shutdown occurred.

As per the Evening Standard, the BBC’s Director of Content Charlotte Moore recently shared in The Telegraph, “We’ve been looking carefully at how we can safely put some of our shows back into production, and I’m pleased to announce that we plan to begin filming again on both EastEnders [popular British soap opera] and Top Gear by the end of June.”

This update, although not directly related to Pinewood Studios where most of Disney’s cast and crew members will be gathering, could certainly impact Walt Disney Studios productions.

If London’s reopening protocols are allowing the BBC to restart production on various series, it serves to reason that the same on-set restrictions and precautions could allow Walt Disney Studios to resume filming again soon too.

What has Disney said about film production?

Remember, Disney has not made any official announcements about full-scale film production resuming, excepting Avatar 2, which was formerly a 20th Century Fox property.

On May 5, Disney CEO Bob Chapek stated, “In terms of large-scale production, we’re gonna go through the same process as we do our theme parks… we’re going to be responsible in terms of how we put our own employees and other filmmakers that are partners with us.”

What do you think about the possibility of Disney movies resuming production soon? Share your feelings in the comments!