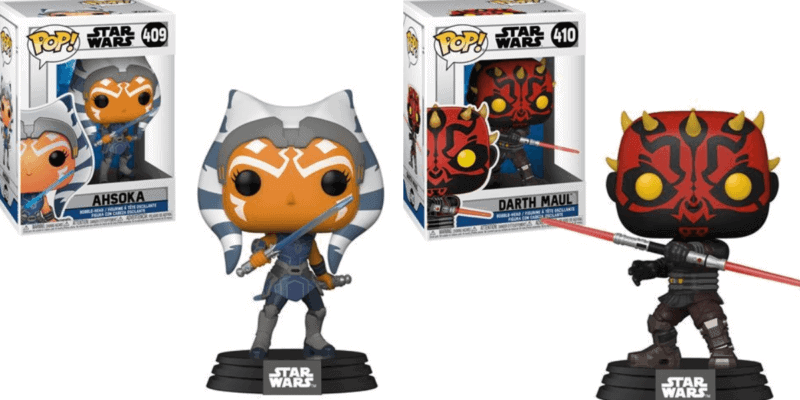 Star Wars fans rejoice, a new selection of Clone Wars Funko Pops is on the horizon.

If you’re a fan of the Disney+ series, you really can’t miss out on this selection of intergalactic figures!

Which Star Wars characters are available?

Each toy will be priced at $10.99 which is the standard price of a new Funko pop doll. There will also be variant editions that will only be available to purchase from Gamestop.

Let’s take a look at them!

A closer look at the new Clone Wars Funkos

Fan-favorite Ahsoka looks pretty impressive in Funko Pop form, especially with her two lightsabers in hand! Of course, there have been Ahsoka Funkos before, but this one looks particularly imposing. The former Padawan of Anakin Skywalker has become such a popular character, she may even be more beloved than Skywalker himself!

Ever since his appearance in Episode I: The Phantom Menace, Star Wars fans have had a soft spot for Maul. This love only became more prominent as his role was expanded in The Clone Wars and Rebels tv series! We love this new Funko which captures the Dark Lord in a menacing battle position. The first (chronological) apprentice of Emperor Palpatine, Maul was succeeded by Count Dooku and eventually Darth Vader. Though he had a comparatively small role in the Skywalker Saga, he quickly became a huge player in the Rebels and Clone Wars shows. If we ever get a Han Solo led sequel to 2018’s Solo, who knows, maybe we’ll see Maul in the flesh again.

Related: Could Lucasfilm Be Approaching R-Rated Territory With ‘Star Wars’?

The titular clones are always lovable and this extra-large Kaminoan is no exception. Fans will no doubt jump at the chance to get a Funko Pop iteration of this more unique clone of Jango Fett, especially as he’s got his distinctive helmet on!

This Mandalorian could give bounty hunter Boba Fett a run for his money in terms of looking cool. We love his composed stance and detailed rifle. Clone Wars fanatics are sure to enjoy this Star Wars Funko Pop in all of his plastic glory.

With the runaway success of The Mandalorian, it’s no surprise that we’re seeing so many characters from the planet Mandalore get the ol’ Funko treatment. It’s so cool that they’ve all got the helmets on, giving collectors a chance to line up all of their armored figures together!

The five Clone Wars Funko Pops will be available in January of 2021. They are available to pre-order now at outlets like Entertainment Earth.

What do you think of the new figures? Let us know in the comments below.