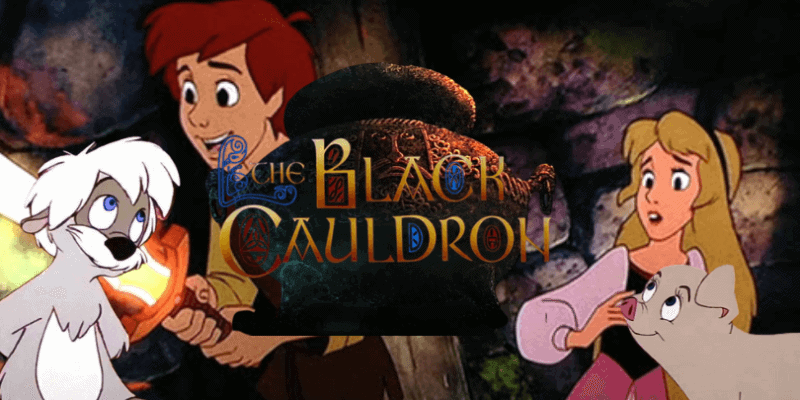 Ah, The Black Cauldron. Not quite as divisive as some Disney films or as beloved as others; just a reflection on the state of Walt Disney Animation during the tumultuous 1970s and 80s.

But what is The Black Cauldron? What is it about, and why did it perform so poorly? All of these questions will be answered, as we give you everything you need to know about the infamous Disney movie ahead of its apparent live action remake.

What is The Black Cauldron about?

The Black Cauldron‘s premise actually makes it sounds like a pretty standard Disney animated film. We follow Taran, a humble assistant pig keeper who dreams of being a warrior. When his oracular pig Hen Wen escapes, Taran must team up with the brave Princess Eilonwy, a bard named Fflewddur Fflam, and a dog-like creature named Gurgi to take down the evil Horned King.

The King (voiced by the iconic John Hurt) aims to use the titular cauldron to raise an army of the dead known as “The Cauldron born” in what’s widely regarded as one of the most disturbing scenes ever seen in a Disney movie. You definitely wouldn’t catch these zombies in Moana!

This super-dark content is often cited as the reason for the film‘s failure, as it’s quite “off-brand” for Walt Disney animation. One scene was so grim, it had to be cut from the film as it featured characters’ flesh melting from their bodies. 80s Disney was hardcore, apparently.

Of course, it does feature a witch, a magic sword, and even an (unofficial) Disney Princess, though, so it isn’t all alien.

What is The Black Cauldron based on?

Much like most Walt Disney Animation movies, The Black Cauldron is based on an existing work. It loosely adapts the first two books in The Chronicles of Prydain series. This could be another reason why many think the film feels so rushed, as it squeezes two books‘ worth of Prydain storylines into one 80-minute movie.

Disney has adapted content not fit for children before, and like its adaptation of The Hunchback of Notre Dame, the producers of The Black Cauldron never quite “found their mojo” with it. The animation is often seen as tired and muted, while the characters lack that endearing spark typical of Walt Disney animation.

Much of this could be to do with the Prydain source material which, while aimed at children, is darker than your average Disney film.

The Production of The Black Cauldron

The Black Cauldron didn’t have it easy. It was reportedly in the works since the 1970s, and was an immediately daunting project, thanks to the many characters and side-stories that had to be squeezed into one feature film. Disney had done fantasy before, of course, but the Prydain books — based on Welsh Mythology — proved difficult to adapt into a successful animated feature.

The film also marked an admirable attempt to turn animation into a medium for all ages. Of course, Disney animation can be admired and enjoyed whether you’re 8 or 80, but The Black Cauldron tried to be a little more mature and gritty compared to say, The Little Mermaid.

Unfortunately for the design team, new head of Walt Disney Studios Jeffrey Katzenberg (now known as the co-founder of Dreamworks) reportedly hated the film and the dark direction it was going. The Horned King’s minions and the terrifying Disney villain himself were considered far too un-family friendly and frantic edits were demanded (including the removal of the aforementioned skin melting scene).

All of this delayed The Black Cauldron immensely, and it eventually saw a release in July 1985, after initially being slated for a 1980 launch.

But all would be forgiven and forgotten if the film performed well and gave Disney another smash-hit animated movie. Unfortunately…

The Response to The Black Cauldron

The Black Cauldron did not receive a warm welcome upon its release. The film was given Disney’s first ever PG rating, turning off some families immediately. It also tried to bank on its long production cycle, with tag-lines like “seven years in the making” used in its hastily devised marketing materials.

And then the film released to almost no fanfare and became one of the worst financial losses in Disney studio history.

iMDB reports that the film had a staggering budget of between $25 and 44 million dollars, while it grossed just $21 million. When you consider that that number doesn’t account for marketing costs, you realize what a commercial failure The Black Cauldron was at the box office.

Critically, it faired better, but it still wasn’t great. Despite a few 9/10 ratings, the reaction was mixed-poor, with The Globe and Mail’s Jay Scott concluding;

“How 12 years and $25- million could be lavished on a movie with narrative holes big enough to swallow the film‘s major creation, a prophetic pig, is a conundrum … this is a movie that knows how to do everything but tell a story.”

The most common criticisms revolved around how unmemorable the film was, save for the dark visuals which reportedly had children weeping in their seats. The fearsome Horned King and a fairly dull “Young assistant pig keeper” protagonist didn’t help either.

The Black Cauldron at Disney Parks 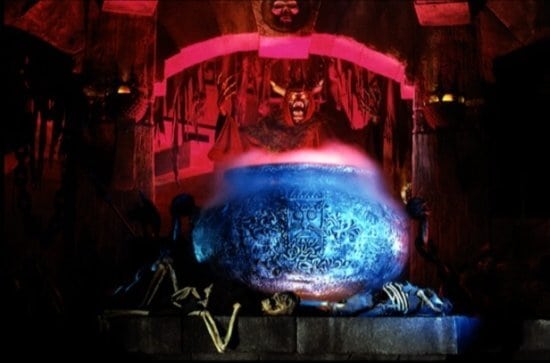 Following a string of successful films, Disney seldom references what’s considered to be the studios’ greatest failure,  and you’ll rarely find a character from or reference to The Black Cauldron in any of the parks. However, at the time of the film’s release, Taron and Princess Eilonwy were both roaming characters, and there was even a tie-in restaurant; Gurgi’s Munchies and Crunchies.

Perhaps the most famous appearance of a Prydain Chronicles character in a Disney Park, however, is the Horned King, who featured as an animatronic at Tokyo Disneyland’s Cinderella Castle Mystery Tour, which closed in 2006. The character has not been seen in the park since, though the King has appeared in other forms of media like The House of Mouse TV show and a handful of Disney video games.

The Future of The Black Cauldron

Fortunately, Disney animation recovered from the movie’s commercial failure with the renaissance of the 90s, starting with 1989’s The Little Mermaid.

In Disney animated canon, The Black Cauldron is either forgotten or mocked as the biggest swing-and-miss Walt Disney Animation ever took, and it seems that Disney has done its best over the years to forget it even exists. Why else would Princess Eilonwy be completely ignored by the Disney Princess brand?

However, reports of a live-action version may just see Disney make a return to the Horned King’s Castle after all. How the studios could make The Black Cauldron‘s evil themes and iconography safe for kids in live-action is anyone’s guess, but many avid Disney movie viewers are eager to see what Disney comes up with. Variety reported that the company acquired the rights to the Prydain books back in 2016, though there’s been no further official information since then.

Related: 5 Unofficial Disney Princesses and How Likely They Are to Join

The Black Cauldron is many things: the first Disney animated film without any musical elements, a commercial failure, and an earnest fantasy feature. But that doesn’t mean that every Disney fan believes this is an irredeemably awful film. It’s regarded by many as by no means the slickest Disney feature, and although Taron is often thought to be a dull-as-dishwater protagonist despite his attempts at heroic deeds, it has heart.

It boasts some grisly and frankly awesome animation, including a very early use of CGI. It’s also one of the first films worked on by Disney legend Tim Burton. The Black Cauldron has amassed a cult following over the years that not even the evil Horned King could destroy and long may that continue.

It’s no Sleeping Beauty, but you might just find something to love in this deeply troubled, macabre Disney flick.

What do you think of The Black Cauldron? Let us know in the comments below.