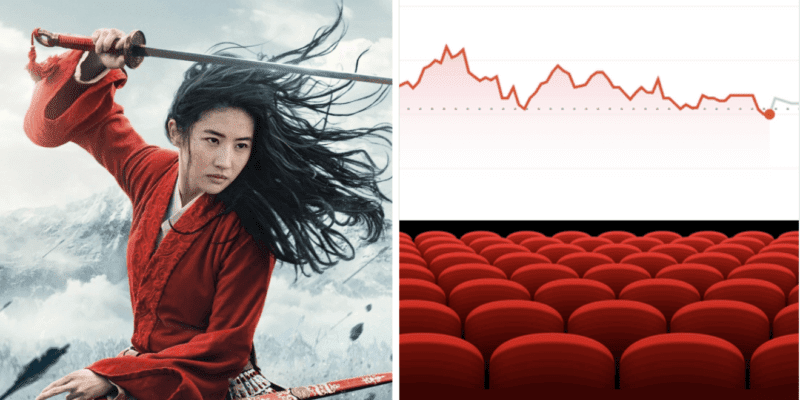 The movie theater industry has been hit hard by the pandemic.

According to a Hollywood Reporter article from June 9, AMC, North America’s largest movie theater chain, “posted a quarterly loss of $2.17 billion, which included $1.85 billion of non-cash impairment charges, against a year-earlier loss of $130 million.”

In fact, AMC has struggled remarkably throughout their theaters’ temporary closure. From concerns that they would close completely to rumors that the entertainment company would be bought-out by Amazon, it has not been an easy road.

Other American theater chains, such as Regal and Cinemark, have also found themselves faltering during the pandemic.

Now, with today’s Disney earnings call announcement that Mulan will debut on the Disney+ streaming platform on September 4 for just under $30, movie theaters could find themselves struggling even more, particularly as many U.S. states are struggling to contain the virus.

Movie theater stock, including AMC, fell today following the Mulan Disney+ news. Although this was certainly reactionary to a certain extent, it does beg the question of whether or not movie theaters will be able to fully rebound from the pandemic in the next few years.

It does bear noting that Walt Disney Company CEO Bob Chapek stated that the streaming release of the live-action Mulan is not indicative of how future Disney movies will be released :

“We’re pleased to bring Mulan to a consumer base that’s been waiting for it as we’ve had to move our (release) dates several times…We’re looking at Mulan as a one-off as opposed trying to say that there’s a new business windowing model.”

Marvel Studios’ Avengers Black Widow prequel is currently set to release on November 6 after being delayed. At this time, it seems that Disney and Marvel have no plans to pull the film, which has the potential to be a box office hit, from the silver screen.

Only time will tell what the long-term effects of the pandemic are on any movie theater chain in the United States or around the world.

Currently, drive-in movie theaters that have been playing re-releases of Star Wars and other hit franchises are the only theaters doing reasonably well in the United States.

How do you think the Mulan Disney+ release will impact movie theaters where you live? Do you like seeing theatrical release films debut on a streaming service instead?