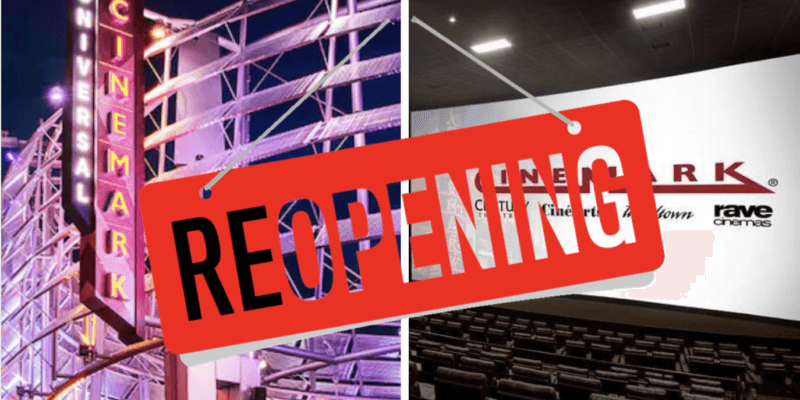 With yesterday’s news that North America’s largest movie theatre chain, AMC, is struggling to survive the closure of their theaters amid the current global pandemic, it may have seemed that all hope was lost for the movie theater industry.

Now, though, Cinemark, the third-largest chain in America, has become the first theater chain to announce a complete phased reopening plan. This week, Cinemark held their quarter one earnings call, during which they outlined how their four-phase reopening will be set up.

Cinemark CEO Mark Zoradi stated that Phase 1 of the reopening plan will begin on Friday, June 19. This “test phase” will include the opening of five Cinemark theaters in the Dallas-Fort Worth Area.

If all goes well, the next weekend will mark the reopening of about a third of Cinemark theaters nationwide, particularly in large metropolitan markets.

Phase 3 of the Cinemark reopening procedure will occur the following week, beginning July 3. Another third of Cinemark’s screens will once again open to the public on that date.

The final phase, Phase 4, will launch the weekend of July 10, with all of Cinemark’s 345 U.S. locations opening their doors. The goal, Zoradi explained, is to allow Cinemark to fully open before the release of Warner Bros’ summer thriller Tenet, directed by Christopher Nolan.

Cinemark is headquartered in Plano, TX, where state officials have currently limited movie theater capacity to 25%.

On Wednesday’s call, Zoradi said he “fully expect[s]” most states will increase the capacity limit to 50% prior to Tenet’s theatrical release date.

Zoradi encouraged movie goers, saying, “we can operate very, very profitable[y] even below that level.”

What does this mean for Universal Studios CityWalk?

Universal Studios Orlando reopened their CityWalk shopping and entertainment district on May 14, following a lengthy closure. We do not yet know which phase of the Cinemark reopening plan will include the Cinemark Universal location in Orlando.

When the movie theater does reopen, however, visitors will need to abide by the safety protocols put in-place by the Universal Studios complex team. This includes wearing an appropriate face covering or face mask and practicing social distancing throughout one’s stay.

What do you think about the Cinemark phased reopening plan? Are you excited to see movies in a theater again soon?

Comments Off on Cinemark Movie Theaters to Launch Four-Phase Reopening This Month!