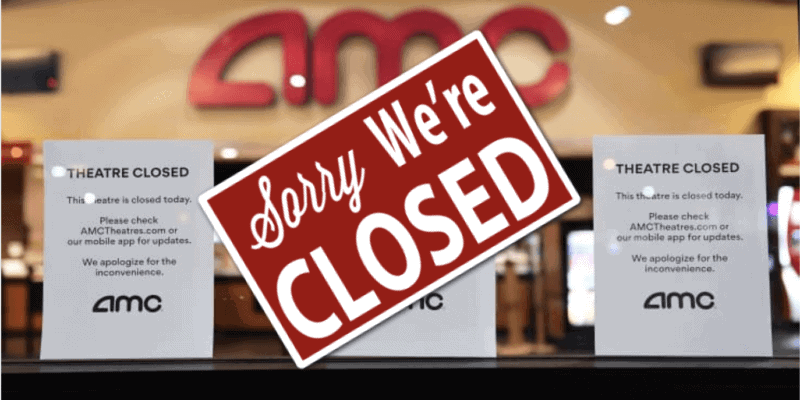 As per our previous reports, AMC Theatres, North America’s largest movie theater chain, have been struggling financially throughout their temporary closure during the coronavirus pandemic.

In an April fiscal report, MKM Partners financial analyst Eric Handler stated, “Based on our view that theaters will be closed until at least August and our belief that AMC lacks the liquidity to stay afloat during that time, we expect the company will soon be faced with filing for bankruptcy.”

Handler also downgraded AMC theater stock from “Neutral” to “Sell” at that time. Soon after that report was released, AMC stated a new debt offering would allow them to sustain operations until they could partially reopen, hopefully by the Thanksgiving holiday.

Now, however, AMC has submitted a filing to the Securities and Exchange Commission in which they released preliminary 2020 earnings results. The movie theatre giant anticipates that they will have lost between $2.1 billion and $2.4 billion during the first quarter.

Although AMC CEO Adam Aron has barred Universal Studios films from their theatres, they have discussed reopening for late summer releases, such as Disney’s live action Mulan (should it not be released directly to streaming service Disney+).

Until that happens, though, AMC has been relying on their limited cash reserves.

This week’s filing stated, “We cannot assure you that our assumptions used to estimate our liquidity requirements will be correct because we have never previously experienced a complete cessation of our operations, and as a consequence, our ability to be predictive is uncertain.”

The statement continued, “If we do not recommence operations within our estimated timeline, we will require additional capital and may also require additional financing if, for example, our operations do not generate the expected revenues or a recurrence of COVID-19 were to cause another suspension of operations.”

“Due to these factors, substantial doubt exists about our ability to continue as a going concern for a reasonable period of time,” it said.

AMC currently has approximately 1,000 movie theaters and 11,000 screens worldwide, so a complete closure would deeply impact movie goers on a global scale. It would also affect Walt Disney World Resort visitors specifically, as there is an AMC location at Disney Springs.

Box office ticket sales for all theater chains have been dismal during the coronavirus outbreak. Every major theater chain in the United States, including AMC and Cinemark, has been dealing with theater closures and loss of ticket sales.

The long-term impact of the coronavirus pandemic on the theater industry remains to be seen.

What do you think about the possibility of AMC Theaters shutting down for good? Tell us in the comments!