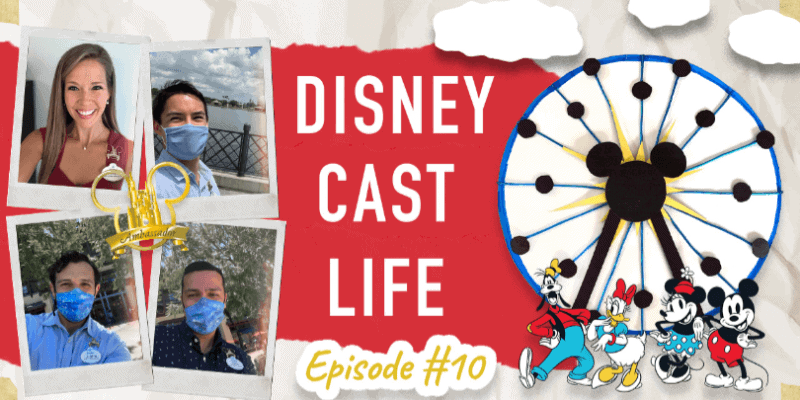 Another day, another Disney Cast Life story, or in this case, three stories!

The Disneyland and Walt Disney World Ambassadors do an awesome job at not only updating us on fun things going on at the Disney Parks and checking in with Disney ambassadors at Disney Parks around the world, but also giving us an inside look at the day in the life of a Cast Member.  This episode of #DisneyCastLife not only showed that Cast Members bring joy and magic to us Guests, but to each other as well!

Last week, on July 30, was International Friendship Day.  The Disneyland Ambassadors, Justin and Rafa, spent the day celebrating together and so did many others.

When Disney announced the Mickey & Friends: Stay True Celebration, Cast Members and Disney fans all flocked to social media to share photos of themselves with friends along with Mickey and his original crew.  There’s no friendship more iconic than Mickey Mouse, Minnie Mouse, Donald Duck, Daisy Duck, Goofy and Pluto because they’re the gang that literally epitomizes #squadgoals!

Sometimes a friendship turns into a love story, which brings us over to Walt Disney World.  Two Cast Members, Nicole and Caiden, posted some photos on social media that had the Walt Disney World Ambassadors curious to find out the story behind them.

It turns out that they had both promised to propose to each other when the time was right.  Nicole was the first to propose and didn’t think Caiden would because she proposed first, but on a lunch to Beaches & Cream Soda Shop at Walt Disney World, he surprised her with a proposal!

Disney Imagineer, Zach Riddley started his career 16 years ago with the expansion of Disney California Adventure.  Now he oversees all the Imagineering projects that happen for the Walt Disney World Resort including the EPCOT transformation.

While he’s chatting with Walt Disney World Ambassador Stephen at EPCOT, Zach points out that his favorite spot is the France Pavilion because of its details and collection of architecture.  What he enjoys most about his job is continuing the legacy that Walt Disney started with Disneyland, and seeing the Cast Members that bring the parks to life everyday.

To learn more about Imagineering, check out these spotlights for Charita Carter and Jeanette Lomboy.  Other #DisneyCastLife episodes include updates from the Disney Resorts around the world, making magic around the world, CMs back to making magic and excited for reopenings, and Disney Cast connecting with all of us.  All these Cast Members play a different role in creating a complete magical experience for all Guests who visit the Disney Resorts.