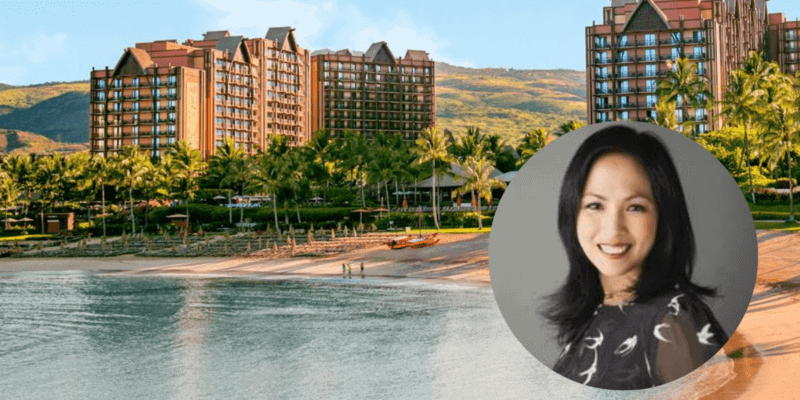 So many inspirational people make up Walt Disney Imagineering, and one of those inspiring Imagineers is Jeanette Lomboy.

This Imagineer is definitely one to look up to. Lomboy has had her hand in countless creative projects at Walt Disney Imagineering, even just over the past 12 years. She has worked on fan favorites from the Kim Possible interactive game at World Showcase in EPCOT to attractions at Pandora – The World of Avatar in Disney’s Animal Kingdom to Pixar Pier at Disney California Adventure.

Perhaps most notable is Lomboy’s involvement in Aulani, A Disney Resort & Spa in Hawaii, which opened in 2011.

Back at D23 Expo 2011, Inside the Magic had the opportunity to interview some of the creatives at Walt Disney Imagineering about Aulani in Hawaii. Lomboy was one of those creatives. She shared that Aulani is about Hawaiian culture, and even though there is a Disney presence, the resort is truly all about Hawaii.

Lomboy said in the interview that Disney’s presence at Aulani is there in order to create the immersive environment, to create story. She shared how the design of the resort is so intentional that it truly makes Guests think. She said that Aulani will first give all Guests a sense of wonder and beauty; then, it will cause them to really think about what they are seeing; and third, it will lead them to ask questions — and that’s where the magic lives.

“Someone once told me, ‘Look twice, think three times.’ That’s the entire Hawaiian culture. So when you walk into the space, you will be wowed. You will think, this is beautiful, this is grand, this is formal. The second time you look at it, you might start to pick out details and make up the story, so the mural, the ki’i, the compass rose on the floor, right? But the third time, you start asking questions. Why, right? That’s where the wonder, that’s where the magic, that’s where the knowledge — that’s where all of that lives. So the third take, right? The entire resort is designed this way.”

Lomboy’s work on Aulani was also showcased last year in a panel at D23 Expo 2019. In a presentation about creating immersive worlds at Walt Disney Imagineering, Jeanette Lomboy spoke aside her colleagues Joe Rohde (with whom she worked on Aulani, and who is known for his work on Pandora – The World of Avatar), Luc Mayrand (known for Pirate Cove at Shanghai Disneyland), and Scott Trowbridge (known for Star Wars: Galaxy’s Edge).

During the Panel, Rohde brought up the fact that unlike the lands at Disney Parks (which immerse Guests in worlds beyond their imaginations), Aulani immerses people in a world that is actually real. Rohde asked Lomboy to share the value of immersion, and as such an Imagineer who played such an integral role in bringing Aulani to life, Lomboy gave a beautiful answer.

So for us as Disney — and everyone expects us to do the best, be the best, give our Guests the best possible experience — we could not stand up as Disney and give them the wrong experience, the inaccurate experience. We knew that if we wanted to help tell the Hawaiian story that we needed to do it right, and to create a world in which we were actually showing you what that looked like was really important to us.

I always say that Disney was just the best possible blank canvas, and the native Hawaiian culture was the paint.”

Lomboy continued to share that when anyone travels to Hawaii, they will get the beautiful beaches and experiences they expect, but Disney’s resort can give Guests more. She explained that Aulani isn’t a replica of a Hawaiian village or something that you’re meant to see in a museum. Instead, the world that Disney has built with Aulani is informed by the past, but it exists in a present moment looking to the future.

Throughout the presentation, Lomboy shares the importance of the work that takes place at Walt Disney Imagineering and explains how every decision made by Imagineers is truly so intentional and integral to the greater stories that Disney is trying to tell. You can watch the full panel below:

Lomboy was also part of the team in charge of the reimagining of Paradise Pier into Pixar Pier at Disneyland Resort. Pixar Pier opened in 2018 and has been delighting Guests ever since. The land is considered by many Disney fans to be a natural fit in California Adventure, as well as distinctively Disney with its playful and happy environment.

Lomboy shared more information about why Disney chose to create Pixar Pier in an interview with Forbes a couple years back:

So when you watch a Pixar film you see yourself in those characters, I think that’s where magic happens. It’s when we bring these experiences and characters to life for our Guests in a way that they would not find anywhere else.”

Jeanette Lomboy continues to work at Walt Disney Imagineering. Most recently in her Vice President – Site Portfolio & Creative Executive role, she has overseen the creative development and delivery of numerous projects at Disneyland Resort and Aulani, including the following, to name a few:

But her impressive resume extends far beyond the projects named above. We can’t wait to see what Lomboy continues to accomplish in her Imagineering career.