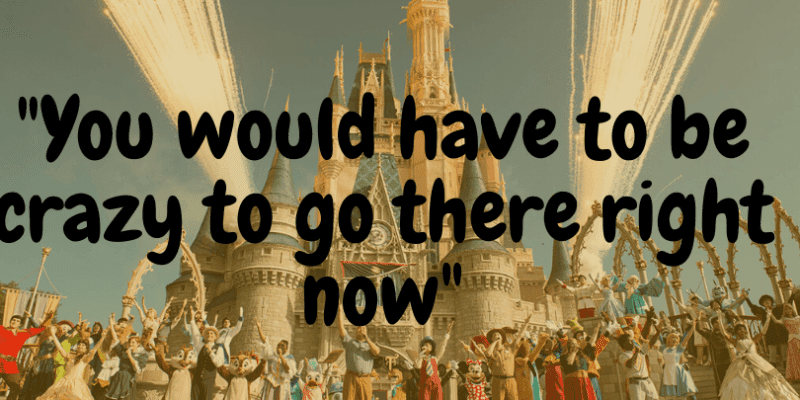 It’s something that we Disney fans have wanted to see for months, but now that it’s here, a vocal collection of social media users have admonished the Walt Disney Company for reopening the Florida parks. The Walt Disney World reopening reaction has been divisive and intense, and here are just some comments that we’ve seen across social media.

As a reminder, the coronavirus pandemic has hit Florida particularly hard as the sunshine state is currently averaging 10,000 new cases per day and broke the national record by reporting 15,300 cases in one day, according to the BBC.

Yesterday, Florida’s Orange County mayor was quoting as saying that Disney’s safety measures are ‘proper’ and that he is proud of Walt Disney World for reopening.

A large portion of the internet did not share that sentiment.

‘You would have to be crazy to go there right now.’

‘REOPENING WALT DISNEY WORLD RIGHT NOW IS IRRESPONSIBLE AND DANGEROUS. FLORIDA IS IN NO PLACE TO BE OPENING ANYTHING.’

"There is no virus in Walt Disney World"

The level of ignorance and greed of Walt Disney World opening The Magic Kingdom is astonishing.

The other side feels WDW is right to stay open

However, there were those who saw the reopening as a positive step;

‘They absolutely are [safe], especially compared to the grocery stores and mega stores that are open. Disney is taking extreme measures to clean everything. If you’re afraid then stay the hell home’

‘Safest place to be with all of their protocols. If you want to stay home, then stay home. I’ll be at Magic Kingdom next week.’

‘Disney is doing their part. But it’s up to the general public to follow through on their end and obey basic protocols. The moment the public fails to abide by what’s being asked is when everything is ruined for everyone else who follow directions.’

‘You all can stay home, as for me and my family we’ll be there soon, just got all of our Park reservations done! Took 8 hours of hold time and dropped calls and call back but we got them.’

This picture turned us into a puddle. We’re so happy to be back at Walt Disney World! ? pic.twitter.com/PAxXnaPftC

Each Disney park is enforcing strict health and safety guidelines consistent with what we’ve seen in parks around the world. Temperature screenings, social distancing, and mandatory masks have all been employed to keep The Magic Kingdom and the rest of the Walt Disney World resort as safe as can be.

However, if Hong Kong Disneyland is anything to go by, this may not be enough as the park re-closed yesterday due to a huge surge in cases of the pandemic.

Regardless of how the theme parks operations go, this Twitter user summarised it best. Be kind to the cast members; the Disney employees just trying to do their jobs at this extraordinary time.

I don't get in Disney drama beacuse it's toxic,

I only will say please for the love of god if you plan to go to Walt Disney World please wear a mask, respect the sanitary guides,social distancing & DON'T BE A JERK to the crew and cast members working there!

What do you think? Should Walt Disney World still be open in this time of extreme pandemic? Let us know in the comments below.