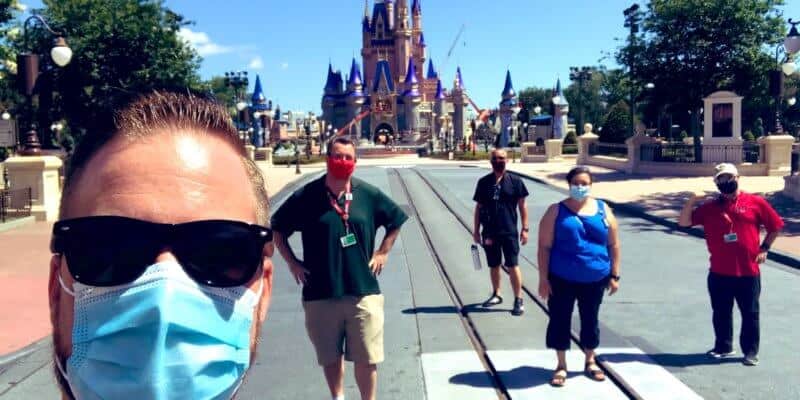 Walt Disney World has slowly seen the return of cast members to the Disney Parks in preparation for the reopening of the theme park resort. As these cast members return, amid the current pandemic, union Leader Eric Clinton of Local 362 team took a tour of the parks to see the new safety measures in place — and during his tour, he took to social media to share some images from inside a few of the parks.

In a tweet on Clinton’s personal Twitter account he shared the images, writing: “Had a fun time this week going through the parks with the Local 362 team! It was great to talk with Custodial Cast Members that are back to work and see the new safety measures put in place on property.”

Had a fun time this week going through the parks with the Local 362 team!

It was great to talk with Custodial Cast Members that are back to work and see the new safety measures put in place on property. #1u #unitehere #seeyarealsoon pic.twitter.com/N3giFZOzgI

The series of images show Clinton and his team outside Cinderella Castle at Magic Kingdom, in front of Spaceship Earth at EPCOT, and on Hollywood Boulevard at Disney’s Hollywood Studios.

These are some of the first images seen inside these Disney Parks on social media since their temporary closure back in March, over three months ago.

As of current, Walt Disney World is still planning to reopen beginning with its theme parks Magic Kingdom and Disney’s Animal Kingdom on July 11. These are to be followed by Disney’s Hollywood Studios and EPCOT on July 15.

Prior to these official reopening dates and ahead of the planned soft reopenings, many cast members are said to be returning in the coming days.

At the time of the Disney Parks’ reopening, all four parks will follow a new set of safety precautions all guests must abide by to gain admission to the parks. These include undergoing temperature checks, wearing face masks, and maintaining social distancing of at least 6 feet from your party and other guests.

What are your thoughts on these images taken from inside the Walt Disney World parks? Let us know in the comments!