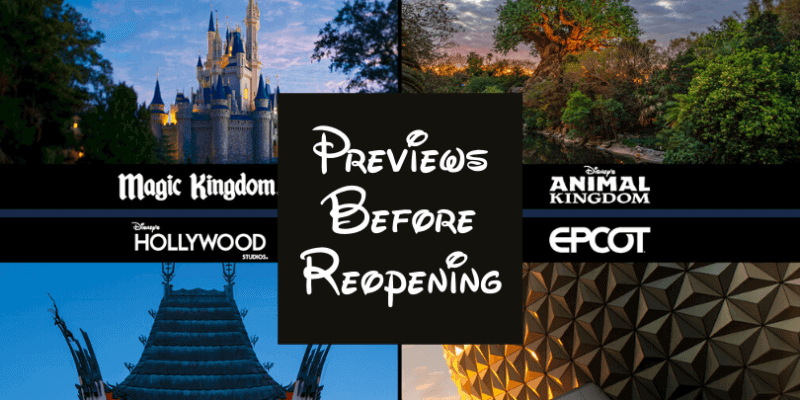 Since this article was originally published, Disney made the announcement that Walt Disney World Resort Annual Passholders will be getting previews to the theme parks before they reopen to the public. You can read all about that here.

Who will get to visit Walt Disney World Resort theme parks before they reopen to the public? We know Cast Members will for sure get previews, but other groups will likely also have a chance to get a little extra pixie dust before everyone else.

“Our plans call for a phased reopening of our theme parks, beginning with the Magic Kingdom and Disney’s Animal Kingdom on Saturday, July 11. EPCOT and Disney’s Hollywood Studios will open on Wednesday, July 15.

We believe our reopening proposal for our property reflects a very thoughtful, methodical, and phased approach. We’ve incorporated all of the reopening protocols throughout our guest experience and our Cast experience. We will deploy a series of soft opening tactics for select audiences several days prior to July 11 with Cast previews and affinity soft opening preview days. This will reflect a thoughtful ramp up in our attendance strategy and allow us to launch, learn, and adjust along the way.”

MacPhee clearly states that Cast Members will be among the first to enter the Walt Disney World Resort theme parks before they fully reopen to the public. But following this, he states that “affinity” groups will also have the opportunity to visit the parks early.

But what are affinity groups? When it comes to Walt Disney World Resort, these groups could include Disney Vacation Club Members, Club 33 Members, Annual Passholders, and other VIPs. It’s not uncommon for Disney to invite members of these groups to preview the theme parks before grand openings.

And when it comes to inviting APs to the parks early, this is something that Universal Orlando Resort has already begun to do. You can read more about their invitations for AP previews here.

However, it’s important to keep in mind that Disney has not yet publicly announced the dates for Cast Member previews of the theme parks before they reopen this July, nor have they shared which groups will be among those guests invited to hang out in the parks before everyone else. Right now, we can only speculate that these VIP Disney fans will have the opportunity to experience the magic before everyone else.

We’ll stay up-to-date on the latest information about Walt Disney World Resort reopening, and we’ll be sure to update Inside the Magic as soon as Disney shares more news about theme park previews.