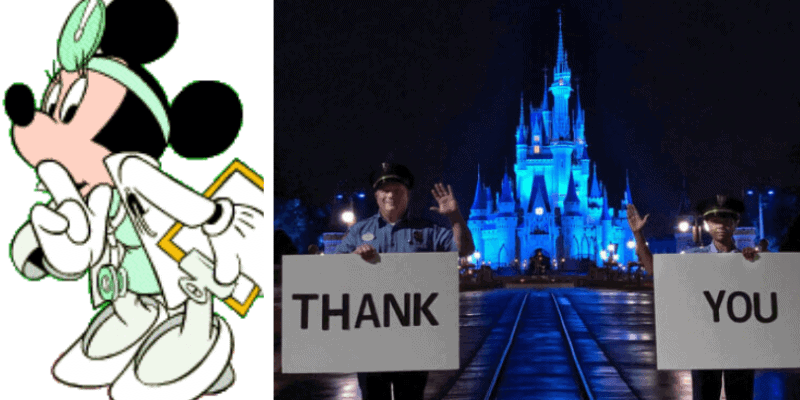 When the theme parks of the Walt Disney World Resort reopen, the first guests to return should be healthcare workers and their families.

Since the pandemic began, healthcare workers have been on the front lines against this disease: attempting to save lives, tending to those infected, and conducting research to desperately find any therapy, vaccine, or all-out cure — on top of caring for patients with all other ailments such as cancer, heart disease, and influenza. They are also the ones working hard to ensure places like Disney World are able to reopen.

While most of us have been asked to stay home and avoid getting sick, they have faced the pandemic and risks head-on. And while many of us have had the privilege to be quarantined at home with our families, long hospital shifts have kept them from their family members.

They deserve a proper reward: they should get to go back to the Most Magical Place on Earth first.

While we still do not know when the Magic Kingdom and the other theme parks plan to open–everything except Disney Springs remains closed until further notice–we have some idea of what to expect when that reopening date comes. Primarily, the parks will be operating at limited capacity.

Upon reopening, theme parks, Disney Resort hotels, restaurants, attractions, experiences and other offerings may be modified and will be limited in capacity and subject to limited availability or closure, based on direction from health experts and government officials to promote physical distancing.

The Walt Disney Company’s Chief Medical Officer also made a statement, expressing the need for–and the struggle of–managing crowd density in the parks. She also suggested that technology might be employed to assist them.

As you can imagine, managing guest density in queues, restaurants, hotels, ride vehicles and other facilities throughout the park and across the resort is a major focus, as we implement physical distancing guidelines based on guidance from health authorities, such as the Centers for Disease Control and Prevention (CDC) and appropriate government agencies. This will likely include implementation of guest capacity measures to comply with state and federal guidelines. We’re also exploring ways to use technology to aid us in these efforts, like with our Play Disney Parks App and through virtual queues at Disneyland and Walt Disney World.

When Shanghai Disneyland reopened on Monday, May 11, they employed crowd-controlling technology in the form of dated tickets. Rather than being able to use a general admissions ticket already purchased, you had to purchase a new ticket for a certain date. Those tickets sold out in minutes, and there has been speculation that a similar situation could become a reality at Walt Disney World. Read more here.

But dated tickets or not, only a fraction of the normal number of guests will be allowed into the Magic Kingdom and other theme parks at first. Healthcare workers and their families should get priority access to that limited capacity.

A Job Still Not Done

Even if Walt Disney World gets to reopen, our healthcare workers’ job is still not done. From nurses and paramedics to immunologists and epidemiologists, their fight against the pandemic still has a long way to go in hospitals, laboratories, and on the streets. A goal of the shutdowns and “flattening the curve” was to slow the infection rate to keep it low enough so the hospitals do not get overwhelmed. We will be back in the world resuming life while they will still be in the trenches fighting for all of us.

They are helping us get to the point where we can leave our homes again and enjoy the magic of Disney World again. It is only right that we honor their hard work and sacrifices by letting them take in the magic first; a way of saying “Thank you all so much for getting us this far.”

Do you think that healthcare workers deserve to go to Disney World first? Let us know in the comments!

The opinions expressed in this OpEd article do not necessarily reflect the opinions of Inside the Magic overall.