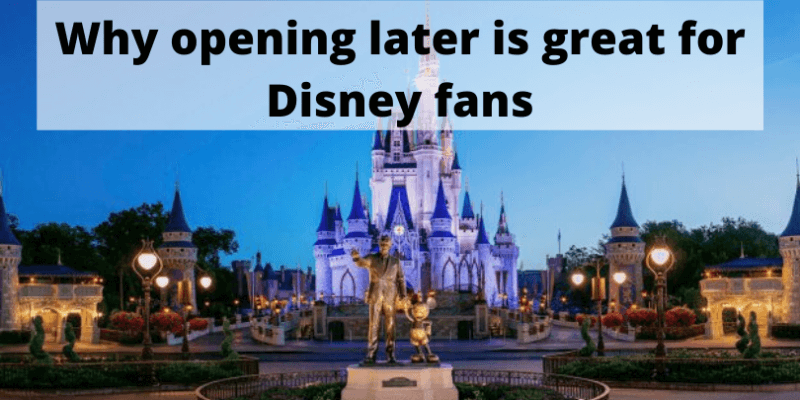 Today we revealed the incredibly exciting news that the Walt Disney World Resort was preparing to open once again after a record-breaking closure during these unprecedented times.

As part of a phased reopening approach, Magic Kingdom and Disney’s Animal Kingdom will be opening on July 11th and Epcot and Disney’s Hollywood Studios opening a little later on July 15th. You can read more about the reopening plans here.

Here are a couple pieces to read if you haven’t caught up on all the news:

With the Walt Disney World theme parks opening well over a month over Universal Orlando opens its doors, let’s take a look at why this is only a positive for Disney fans.

This is the big one. One of the busiest times of the year at Walt Disney World and Disney has chosen not to open for it and personally, I applaud them for it.

Although it is a huge time of celebration for everyone living in America, its important that Disney doesn’t encourage a huge amount of people to flock to the resort and overwhelm the parks at a time when Disney needs to make sure that they are in control of everything.

Make no mistake, the parks are going to be losing a significant level of revenue by not operating during this time, but it stands as an incredibly wise decision to postpone the opening until after this busy weekend.

Getting technology in place

With a date now set, Disney has just over a month to get all of the technology in place that they need in order to make the theme parks as safe as possible for guests arriving into the parks.

This includes making sure the new reservation system is up and working as expected. This is especially pertinent given the feedback on how poorly the My Disney Experience app is said to perform under immense pressure.

Disney wants to get things running as smoothly as possible and there’s no doubt going to be huge changes on how guests enter the parks with temperature checks and the enforcement of mask-wearing.

Learning from other theme parks

One of the other positives to Disney opening a little later is that they will be able to implement what they have learned from the other theme parks that have opened up in central Orlando and indeed, the rest of the world.

By the time Walt Disney World reopens on July 1tth, Universal Studios and Islands of Adventure will have been open for over a month. There will likely be a lot to learn over that six week period that Disney can take onboard into the opening of the Disney World theme parks.

With the reopening of the parks comes a lot of new policy that will be new to many guests arriving in the parks for the first time in several months. This includes mask-wearing, social distancing, temperature checks, and of course, making sure all of these policies are being kept properly by guests.

Walt Disney World has a huge number of Cast Members currently furloughed that they need to organize bringing back. In addition to this, new teams (such as the Social Distancing Squad) need to be mobilized in order to make sure that every guest is following the new rules.

The Social Distancing Cast Members have been doing a great job in Disney Springs so far, but they will need to work a lot harder when the theme parks reopen to make sure people are enjoying the parks safely.

Do you agree that Walt Disney World opening later than many other theme parks is a good thing? Let us know in the comments below!