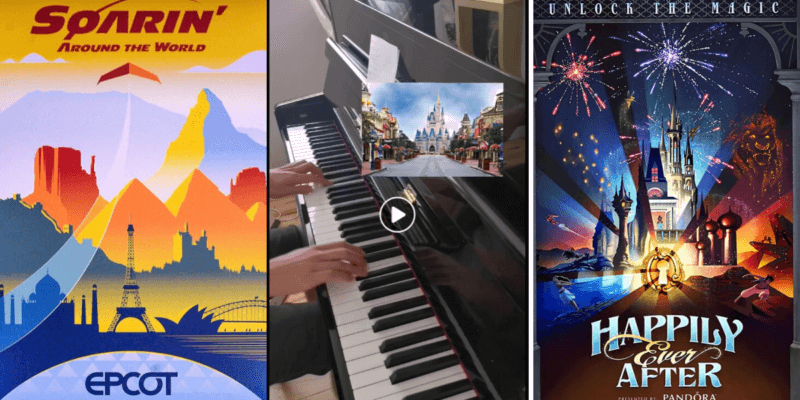 “Anyone fancy a whirlwind tour of Walt Disney World?”

There is no denying that one of the most significant magic-making aspects of the Disney Parks is the music. Music sets the mood and becomes the score to our own adventures. Music also comes home with us, and songs from our favorite attractions make our hearts ache to return to the magical moments we once had.

Well, Pianist Mark Sewell, took it upon himself to create a medley of some of the most iconic music and songs found in the Disney Parks.

Anyone fancy a whirlwind tour of Walt Disney World? Hopefully you recognise a few, there's some real geeky ones in there…

Mark begins as most Disney days do, with the music of Main Street, U.S.A. Then we go hit up our first attraction: The Enchanted Tiki Room. After the show, we stay in Adventureland for a swashbuckling adventure on Pirates of the Caribbean. Trading our longboat for a hollow log and plunge into the briar patch on Splash Mountain. We then jump from “Zip-a-dee-doo-dah” to “it’s a small world.” After our cruise, it’s on to Tomorrowland and the Carousel of Progress followed by a visit to the 999 happy haunts of Liberty Square.

After our tour of the Haunted Mansion, we park hop to EPCOT to do some Soarin’ Around the World and then a Journey into Imagination followed by a stop at The American Adventure. Then we park hop again to Disney’s Hollywood Studios to brave the Twilight Zone’s Tower of Terror, and to try our luck at Toy Story Mania.

Now, just like a real day at Disney World, it would be getting to about that time for Disney’s Goodnight Kiss. So, Mike moves the medley to some of the most memorable nighttime spectaculars. Since we’re in Disney’s Hollywood Studios, Mark begins with Fantasmic! Then he takes us back to the Magic Kingdom and throws it back to the SpectroMagic parade. From there, he transitions to the Main Street Electrical Parade and then jumps us to Disneyland park for Fantasy in the Sky.

Back in the Magic Kingdom, he concludes with Wishes, Happily Ever After, and finally the Mickey Mouse Club theme song.

Book Your Next Disney Trip

If this medley got you aching for a Disney trip, our friends at Academy Travel are ready to help you book your next trip right now! Disneyland and Disney World will be back open before you know it, so why not have your trip planned ready to go? Academy’s travel agents have years of experience and know what it takes to get you the best possible deal on your next Disney vacation. Click here to learn more and receive your free no-obligation quote today!

Comments Off on This Disney Parks Music Medley On Piano Is What Disney Fans Need Right Now!