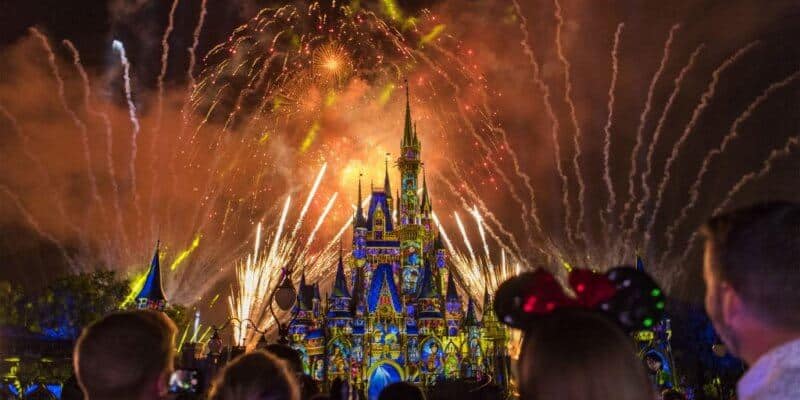 Right now, you’re unable to visit the Walt Disney World Resort theme parks due to the recent pandemic. However, that doesn’t mean you can’t cap off your day with a bit of magic! Why not celebrate the end to your week with Magic Kingdom’s nighttime spectacular “Happily Ever After?”

This enchanting celebration takes guests on a dazzling journey of light and color, which captures the humor, heart, and heroism of all of our favorite Disney animated films. Take in all of this show’s amazing lights, lasers, and special effects virtually from your own couch in the video below!

If you’re in the mood for even more magic, be sure to check out some other virtual experiences you can also take on right from your couch. Specifically, “Magic Happens Parade” at Disneyland and Mickey & Minnie’s Runaway Railway at Disney’s Hollywood Studios!

Magic Happens Parade, Disneyland’s first new daytime parade in almost a decade, is led by no other than Mickey Mouse and includes a spectacle of fabulous floats full of some of our favorite Disney characters. All of which, who are brought together to remind us that wings aren’t needed to fly, shooting stars were created for wishes and magic doesn’t end at midnight!

See the FULL parade in the video below!

This new experience, led by darling duo Mickey & Minnie Mouse, takes guests on a whirlwind ride through a world where the rules of physics don’t apply–and features unexpected twists, slapstick gags, and mind-boggling transformations at every turn.

Check out the FULL experience in the video below!

If you’re in the mood for even more magic, be sure to also check out some other at-home virtual experiences, and be sure to enjoy this enchanting singalong with Magic Kingdom’s Dapper Dans,

Which song from “Happily Ever After” is your favorite? Let us know in the comments below!