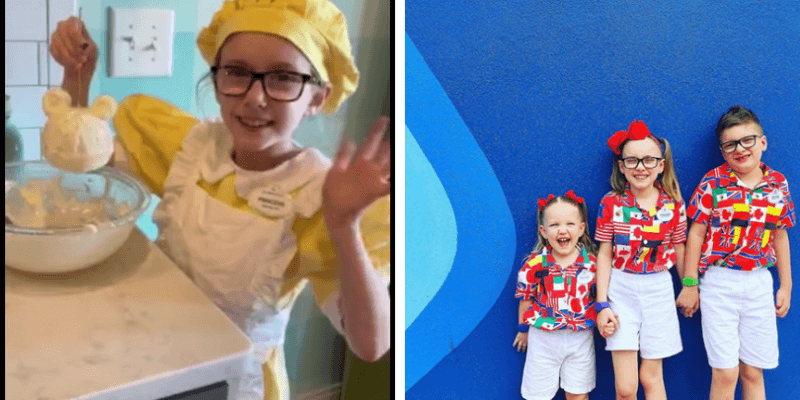 Walt Disney World is not complete without its Cast Members. Their presence and personalities add an integral part of each Disney World experience and they don’t get enough credit for their work and the guests they put up with. But one Disney mom has taken notice of how special Disney Cast Members are and decided to put together the most adorable tribute video.

Ginny Curtis Phillips and her three kids have a very special admiration for the Disney World Cast Members. When they go to the parks, rather than Disneybounding the characters, they will dress like the Cast Members. In hand-made costumes. And Ginny has been doing it with her kids for so long, and collected so many different CM outfits that they were able to create this awesome tribute video to all the CMs two-finger points and all.

This video, like so many others across the internet right now, is another way Disniacs are spreading Disney Magic to all the fans and cast members now stuck at home. But, when we saw this video in particular, we felt each character carried a level of authenticity that was pure and hilarious to us who are lucky enough to frequent the park.

“We are APs and have dressed as cast members for years,” Ginny explained to Inside the Magic. “We love making gifts and spreading magic and love while in the parks. We’ve made real relationships with them over the years! I am hoping this brings some of them some cheer and happiness during this time…especially the college students.”

The video took two days to film and features 41 miniature cast member uniforms out of 150+ she’s compiled with the help of her friend, Sharan. But Ginny would score another parenting win as she got all three of her kids to participate in the project: Her oldest daughter, London; her son, Jude; and her youngest daughter, Campbell. They have mastered the movements, the scripts, and the subtle sass all CMs are known and loved for, and they’ve even gotten some friends to play along with them.

“We have been wearing them for YEARS in the parks,” Ginny shared with us. “This video has been so awesome because as cast members have been seeing it, they have messaged us with pics of us with them or things they still have from us, and it’s so heartwarming. They have given us so many magical memories, I cannot even name them all. To be able to give them a giggle with this simple video is pretty amazing…especially to all the CPs.”

While we still love seeing all of the at-home attraction recreations, it warms our hearts to see such a dedicated a tribute to almost every kind of on-stage CM that interacts with the guests from the park gates to the FastPass queues to the Confectionary.

But as far as which attractions are their favorite, Ginny said that it is a constantly changing answer. However, for the time being, her favorite is “It’s a small world,” London’s favorite is a tie between Tower of Terror and the Happily Ever After fireworks, Jude’s favorite is also a tie between Star Tours and Millennium Falcon: Smugglers Run, and Campbell’s undisputed favorite is Peter Pan’s Flight.

Related: From All of Us at ITM: Thank You, Disney Cast Members, For Everything!