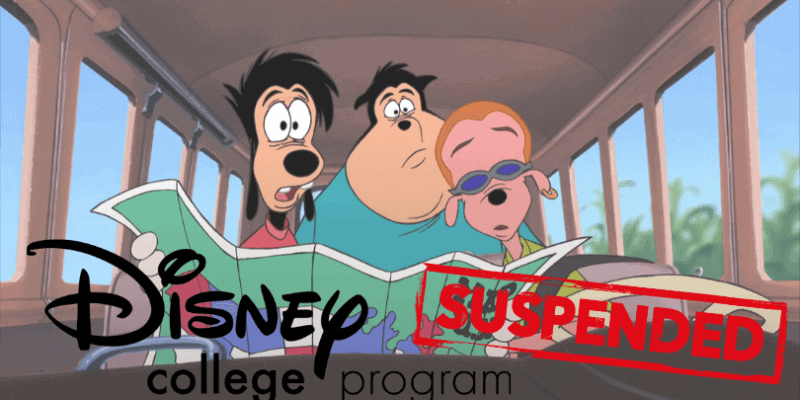 According to the update, Disney is working with program participants individually to find a solution for every person’s circumstance. Disney also shared that those who wish to reapply can take a survey to share their interest, and Disney will reach out to them.

We know these are extremely difficult times & appreciate your continued understanding. We are basing our decisions on the safety and well-being of our Cast Members and Guests. No one will be without accommodations. Please read our letter to you. pic.twitter.com/uqdDfZdKfW

We have now received word that the Disney College Program at Disneyland is also being suspended. We are still waiting on an official statement from Disney. We will update our report when more information becomes available regarding the College Program Cast members at Disneyland and Disney World.

As of today, Disneyland and Disney California Adventure are officially closed for the time being, from now through the end of the month.

The Coronavirus is being taken very seriously at The Walt Disney Company as we have just heard from College Program Cast Members that the program will end early at Walt Disney World, effective immediately.

We have had this confirmed from multiple CPs and have also seen an official announcement from Disney that states the following:

We are taking several measures following advice from the state and local officials, as well as recommendations from health agencies to help protect the safety and wellbeing of our Cast Members and Guests.

We know you may have many questions about how this will impact your program experience and we want to provide you with an update.

Based on these factors, we are closing many of the Disney Program housing complex buildings and are requiring these particiapants to collect their belongings and depart by March 18 at 11 a.m.

The excellent news for CPs is that Disney continues to pay everyone through the month’s end and removing weekly housing deductions. Here is confirmation of this:

All Disney Program particiapnts will continue to be paid through the end of the month and weekly housing deuctions will be waived effective immediately.

Disney is also very good at understanding just how vital the program is for those taking part and has confirmed that each participant will be given a successful program completion to make sure CPs have the opportunity to pursue future roles within the Walt Disney Company.

Given how many of the CPs were due to be at the parks until the Summer, it does suggest Disney may be preparing to keep the parks closed in the US for the foreseeable future. A reminder that as of Monday, every Disney Park around the world will be closed following the outbreak of the Coronavirus.

We at Inside the Magic will be here to help keep some of the Disney magic alive in your homes. Stay tuned for lots of ideas in the coming weeks!

Have you been impacted by the closures of Disney Parks around the world? Let us know in the comments below.