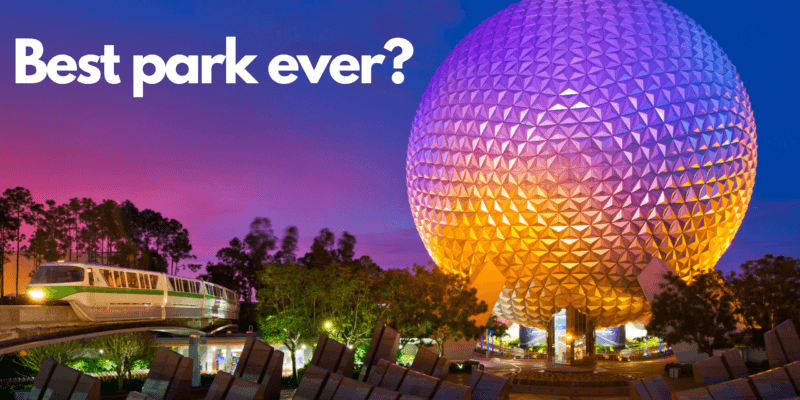 Those that know me well aren’t surprised to see me claim that EPCOT is the greatest theme park on the planet. I also know there will be a lot of you out there will disagree with my thoughts throughout this piece and I actively encourage you to leave me a comment at the bottom of the piece with your thoughts. But please read my reasons first!

So… why is EPCOT the greatest theme park?

You learn while having fun

While the learning part doesn’t feel as good as it used to, this isn’t because it isn’t there, it’s simply because you are no longer a kid! The likes of Spaceship Earth, Living with the Land, Mission Space, all the countries of World Showcase, and even Figment all have something unique to teach us about the world. The best part about it is that you can have a lot of fun while doing it.

I learned so much in my early years from going to EPCOT including how to respect people from different cultures and it helped to drive my passion for new and exciting technology. In fact, without EPCOT I wouldn’t have the career I do today in Digital Marketing.

The Festivals always bring something new

I know there’s a lot of people who dislike EPCOT during festival seasons and are fans of what has been known as “Diet EPCOT” (EPCOT without a festival), I am a big fan of the four major festivals that take place during the course of the year.

For reference, these are:

Each of the festivals brings something unique to the park from the incredible topiaries of the Flower & Garden Festival to the delicious treats from around the world that are present throughout World Showcase during the Food & Wine Festival.

I’ve found that as I’ve gotten older I have enjoyed these festivals more, especially since I turned 21 (a few years ago now) and can enjoy the festivals to the full, particularly the Food & Wine.

As each of these festivals arrives at the park, they also bring unique merchandise that changes every year. Though the Magic Kingdom has the Very Merry Christmas Party and Mickey’s No-So-Scary, EPCOT just has more events that actually change on a yearly basis.

It’s given us attractions like Horizons, Spaceship Earth, and Living with the Land

Horizons (RIP) remains one of the most talked-about attractions in the history of The Walt Disney Company and its theme parks. On top of the memories that the attraction gave to so many people, EPCOT has also given us the likes of Spaceship Earth, Living with the Land, Test Track (later used as a basis for the Cars Land attraction in Disney California Adventure), The Universe of Energy, Wonders of Life, and of course the original Journey into Imagination.

All of these attractions have done an incredible job at giving generations of people wonderful memories and the ones that remain in the park today such as Spaceship Earth and Living with the Land are among the best attractions in any theme park in the world.

It teaches us about culture

I remember being a kid and wandering around World Showcase and being amazed by how I was able to walk between countries and experience different sights, smells and, wonders from countries around the world.

Visiting EPCOT will never replace visiting the actual countries but if it gets the interest of a certain culture as it did with me and Japan then the Imagineers have succeeded. My love of Japanese culture and the country shooting to the top of my bucket list of places to visit wouldn’t have happened without EPCOT.

There are plenty of activities for the young and old to enjoy in World Showcase and the area of the park only gets better as you get older.

Le Cellier is located there

Le Cellier is my favorite restaurant on Walt Disney World property and I could have written an entire piece that details my love of the steak, cheddar cheese soup and, pretzel bread but instead, I will use it as an intro to food at the park.

EPCOT has the greatest range of cuisines to enjoy at a theme park in the world. You can enjoy anything from Canadian steak to Chinese, Japanese and even classic British fish and chips (though coming from someone who is British, they aren’t the same).

You could visit EPCOT 50 times and still be trying a new food or drink that you’ve not had before. That to me is just incredible.

The lovable purple dragon calls EPCOT his home and although his attraction is nowhere near as good as it once was, he’s still an incredibly popular character at the park.

Figment limited edition merchandise is constantly being released (especially during festival seasons) and has ranged from pins, t-shirts, hats to Pop Funkos (one of mine pictured below).

Figment is going nowhere anytime soon, I just hope that Disney gives his attraction the love and care it deserves in the future. For more on Figment, go and check out my previous piece on him.

There’s a lot more to come

The future of EPCOT is looking even better than Future World. With new attractions including  Guardians of the Galaxy: Cosmic Rewind (EPCOT’s first roller coaster) and Remy’s Ratatouille Adventure alongside a new Mary Poppins attraction and a rumored new country in World Showcase, the future is very bright for the world’s best theme park.

Do you agree with my thoughts on EPCOT being the best theme park in the world? Let me know your comments below!