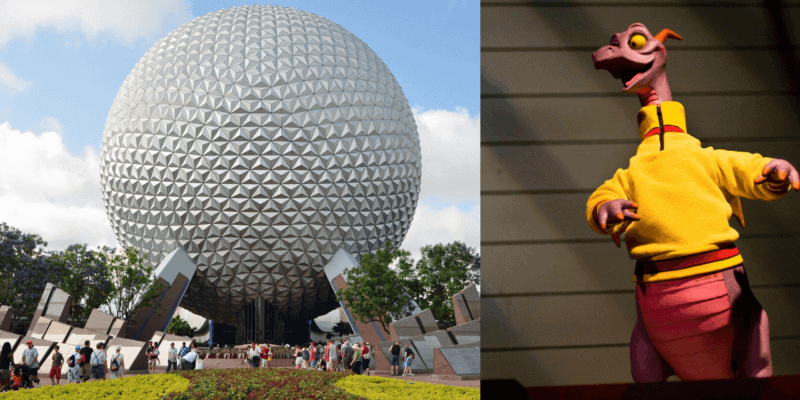 If you’re a fan of Walt Disney World or EPCOT specifically, you will already be familiar with Figment, the little purple dragon that sits within the Imagination Pavilion.

You may also be aware that in recent years we have had the misfortune of having our favorite park mascot being pushed to the side in his attraction by a combination of a bad ride and Dr. Nigel Channing (Eric Idle).

That being said, here are a few reasons why we think Figment is not only going to remain in the park for the foreseeable future but why a return to greatness is only a matter of time.

There’s a reason why the likes of Festival of the Arts, the Flower and Garden Festival, and the Food and Wine Festival usually all have Figment related merchandise, he sells!

Whether it pins, t-shirts, sweaters, hats, MagicBands or even socks, Figment continually demonstrates himself as an incredible character that sells merchandise on a regular basis.

Heck, I have two Figment Pop Funkos on my desk alone!

As long as Figment continues to sell merchandise, he isn’t going anywhere.

Figment is a lovable character

What’s not to like about Figment? He teaches kids and adults alike the importance of having an imagination and it’s fantastic to see kids engage with him in a positive way despite Journey into Imagination not being the best representation of the character we’ve seen in an attraction.

He’s also super cute and that helps as well right?

Those who grew up in the 80s and 90s will remember a better time with Figment and how we once had the Dreamfinder with him in his attraction. I am 29 and confess to only having vivid memories of The Dreamfinder but still loving Figment.

My wife who only went to Walt Disney World for the first time back in 2009 is also a huge Figment fan and she never knew the glory days of Figment! The point is, it isn’t just the original 80s EPCOT fans that love Figment and it isn’t just people being blinded by nostalgia.

The next phase of EPCOT updates?

Though it was a surprise not to hear any updates for the Imagination Pavilion at last year’s D23 Expo, but it was mentioned that there were more updates to come in the future.

With Spaceship Earth getting a huge refurbishment in the coming years and many other changes on the way including updates to The Seas and brand new attractions including Guardians of the Galaxy: Cosmic Rewind and Remy’s Ratatouille Adventure, surely Figment on the list for the next wave of updates?

I don’t actually know anyone that doesn’t like Figment. Sure, a lot of people dislike the current attraction but the character himself seems loved by almost everyone that goes to EPCOT.

What do you think, does Figment have a bright future at EPCOT? Let us know in the comments below.