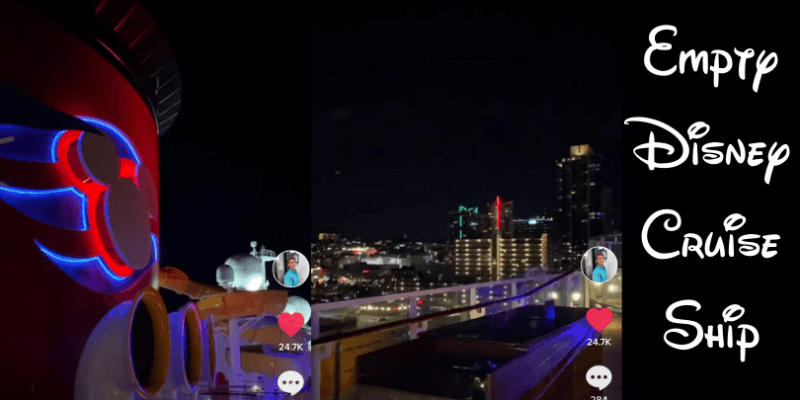 Many Disney fans were preparing for their Disney cruise vacation that they wouldn’t be able to get along with their embarkation.  The Disney Cruise Line suspended all their sailings for the near future.  When the news broke, there were some people still on the ship though, the crew!  Many fans wonder, what does Disney Cruise life look like with no guests on board?

Well, we’re able to find out thanks to one of the Cast Members aboard one of the Disney cruise ships.  Cast Members at Disney Parks all over the world and those in the Disney College Program at Walt Disney World Resort have been posting a lot of magic on TikTok like memories and Disney challenges.  Scrolling through and checking out these videos, we stumbled across this one from a Disney Cruise Crew Member!

Shane Norys who is one of the Disney Cruise Line Entertainment dancers had an itinerary planned for us, and it’s a tour around an empty Disney cruise ship he’s been living on.  Commenters were trying to guess which cruise ship he was on.  Was he on the Disney Fantasy, Disney Magic, or Disney Dream?  Nope! He’s on the Disney Wonder at the San Diego cruise ship port.

As a Disney entertainer with no guests to entertain, he takes us around the ship as a passenger himself. We didn’t get a look at the stateroom, but we did get to see a quite a few fun stuff aboard a Disney cruise.  Starting in the lobby, he takes us to different ship deck stops to see the restaurants, a pub, and ends with a long view of the pool deck and top deck view of San Diego.  The crew has since been sent home to protect their health, but we’re lucky he snapped this quick tour before he disembarked!

Disney Cruise Ships are not the only thing that we’ve seen empty videos and photos from, but we’ve seen empty Disney World and Disneyland content.  Even with no guests and only a few essential Cast Members, the Disney parks are nothing short of magical.  In the meantime, Disney has been keeping us occupied with Disney Magic Moments and we’re loving it!

If you’re really in need of an escape, you can set sail with this family as they recreate a Disney Cruise vacation from their home!  It’s so funny and will sure to be a good time.  Where do you dream you’ll be going?  Maybe you’re sailing in your cabin from Florida to the Bahamas and Castaway Cay.

All of these videos and photos make us appreciate the magic that Disney brings to us each and every time we have an experience with them.