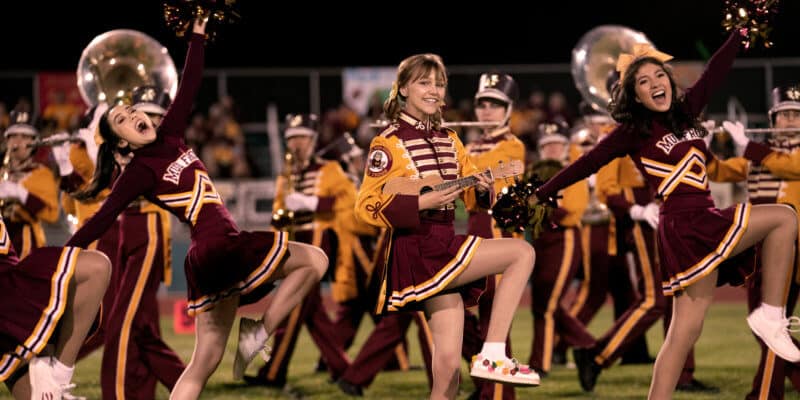 Streaming to your living room March 13, 2020 is Stargirl, based on Jerry Spinelli’s novel of the same name and inspired by his wife. The story features Stargirl played by Grace VanderWaal (the ukulele playing season 11 winner of America’s Got Talent) moving to a new High School in Mica, Arizona.

But first, this is Stargirl coming to Disney+; NOT The CW DC Universe series also titled Stargirl and also coming in 2020. In fact here is a trailer that debuted a few minutes ago.

Arriving at her new school Stargirl is a confident and eccentric character who does things her own way. Coming from a homeschool background and transitioning to public school she faces the pressures common to High School and her teenage years including the pressure to conform and fit in.

Inside the Magic got an opportunity to visit the set of Stargirl and meet the cast, director, writer and producers of the movie. In the process, we came away with a handful of reasons you should watch Stargirl and even a few reasons that you might want to take a pass. We believe this is an under the radar movie you gotta see, much like Noel and Togo. Here are Inside the Magics top 5 reasons you Gotta See Stargirl.

True to the Immensely Popular Book

In talking to the Script Writer and Producer Kristin Hahn she sheds some insight behind this disconnect in adaptations:

When adapting a book you have to take the DNA of the book and the characters of the story and you have to do a complete Frankenstein reimagining of it in a completely different structure. Most books are not structured as movies even if they appear to be as a reader. As you get into the structure of compressing a 3 act structure it [the book] doesn’t translate that way.

Books tend to be very internal, that is the reason we love them because you get lost in the point of view of the characters. You are inside their head and their secret thoughts. That is what makes a great character and its how you get to know and relate to that character.

With the movie a lot of times you have to externalize everything that is internal. That is the sleight of hand part [for the screenwriter]. My goal as an adapter is to hopefully write a script that is the sleight of hand that even the author can ideally read it and say ‘WOW I don’t miss anything that you left off the table from the book. You really got the essences of the story, the characters, and you captured all the things that were the most resonate.’

You can’t include everything from the book, there is just too much. So I just try to take the cream off the top of the book and then build a new scaffolding and architecture that works for movie storytelling and compress things that work.

For those of you who like me haven’t lived inside the head of a screenwriter, this still makes intuitive sense. I have a better appreciation of why so many adaptations go astray from the original story. There is a storytelling set of decisions the screenwriter is faced with and he/she has to decide which approach to take. For Kristin the answer to that question was simple. She explains that she actually wrote the script for this book before she had a buyer for the script.

When I read a book and if I feel viscerally affected by that book, emotionally impacted by the story and characters then I feel a strong desire to adapt it. That has happened a couple of times; Stargirl was one of those times. Then I feel an enormous responsiblity to the author, that is my second feeling, to honor the spirit of the book.

Whenever I take a job adapating a book I call the author right away. Some people take an arms length approach with authors, I don’t. I think that is a terrible idea. I pull them in, I embrace them, I get them to know me and things I’ve written so they know how I write. Screen writers are afraid that authors will feel too much ownership, and start to tell them what to do.

I promise them that I won’t make a movie unless they are going to lead the parade for this movie. Unless they read the script and they say you have my blessing, and it litterally needs to be that and not just that I feel OK about it.

Nevertheless, changes occasionally must be made from what the author desires to protect the integrity of the movie’s storytelling. BUT having a commitment to stay in such close communication with the author should give fans of the book all the comfort they need that this is a movie that will rekindle their love of the book and story.

After capturing America’s hearts as America’s Got Talent season 11 winner and also the winner of the 2017 Radio Disney Music Award for Best New Artist, Grace VanderWaal has a large and growing fan base. Grace’s appeal is her unique style, individual approach to music and of course her ukelele. In talking to the Director and Producers of the film, it was obvious to them that the Grace we saw on TV during the 11th season of America’s Got Talent is such a close representation of Stargirl that she had to be their lead in the movie.

For those who aren’t familiar with the Stargirl story but know Grace’s story, I think it’s fair to say this is also an adaptation of sorts for her story and life. Grace shared with Inside the Magic that:

Of note, this article will be published on January 15, 2020 which is also Grace’s 16th Birthday…Happy Sweet 16th Birthday, Grace! In the interview, Grace mentions that she no longer goes to public school but she remembers the challenges of her day’s public school well.

If you are among the millions to love (or at least appreciated) seeing Grace VanderWaal perform on America’s Got Talent then I think this story that is both relatable to her as an individual and one in which the directors saw such a close personality match will make it resonate for you.

Positive Message Speaking “Up to Teens”

Some of the things Disney fans appreciate the most about Disney content is 1) Great Storytelling and 2) Safe and Positive messages. There are so many messages today that the more we can surround ourselves with positive messages the better our own outlook on life becomes.

Teenagers will sniff out the fake and inauthentic content. But thanks to the tradition of great storytelling and a stated desire to speak “Up to Teens” (instead of speaking “Down to Them”) Stargirl is poised to make a connection with the hard to reach teenage audience.

So for teens, those soon to reach their teen years or young adults for whom those years are in their recent past this movie is especially for you. Messages in the movie address the pressure of popularity, making friends, and being a teenage girl.

Filmed in My Home of Albuquerque New Mexico

Yes, I know – this reason to watch the movie may be a little odd but bear with me as I explain.

If you know of Albuquerque from Breaking Bad prepare yourself for something new. The original Sunshine State is now known as the Land of Enchantment for its scenic beauty and rich history.

The book is set in Mica High School; in the fictional town of Mica, Arizona. For the movie, Albuquerque and Truth or Consequences New Mexico were selected for the filming locations.

New Mexico is both unique and distinct from Arizona yet similar enough to pass for it as well. Bringing this movie to New Mexico takes advantage of not only the state’s film industry but it is also the hometown of the screenwriter, Kristin Hahn.

New Mexico is a much more eccentric state in the Southwest than is Arizona which subtly helps bring out Stargirl’s personality. I think it was a clever decision to film here that might go unnoticed by those who aren’t familiar with the Southwest.

What Do You Have to Lose? In Fact, You Might Have a Lot to Gain

Honestly why not watch the movie? Even if the story is unfamiliar the chorus of requests for new and original content will only be fulfilled if audiences tune into these original movies. In other Disney+ movies such as Noel, and Togo we are finding that Disney also does a good job with new storylines and concepts, but it takes us as an audience to reward those efforts.

As Disney fans, we can be a fickle bunch at times flocking to sequels and remakes in droves causing them to be huge blockbuster successes but at the same time complain that we are getting too many remakes, or the remake wasn’t done “correctly.”

If that is you on any level put your money (or time) where your mouth is and watch Stargirl even if you aren’t familiar with the book or know who Grace VanderWaal is. Stargirl is the kind of movie that as fans we say we want and that by itself should be enough reason to watch.

Not a Disney+ subscriber yet, correct that oversight by signing up here. In addition to watching Stargirl, you can also watch the extremely popular Disney+ series The Mandalorian featuring internet sensation Baby Yoda. Then take a look at Lady and the Tramp or the extensive library all of our favorite Disney movies.

Fans of the Book: Do you plan on watching Stargirl when it debuts? How do you feel about this adaptation?

Comments Off on Stargirl Now Streaming: 5 Reasons You Gotta See Stargirl on Disney+