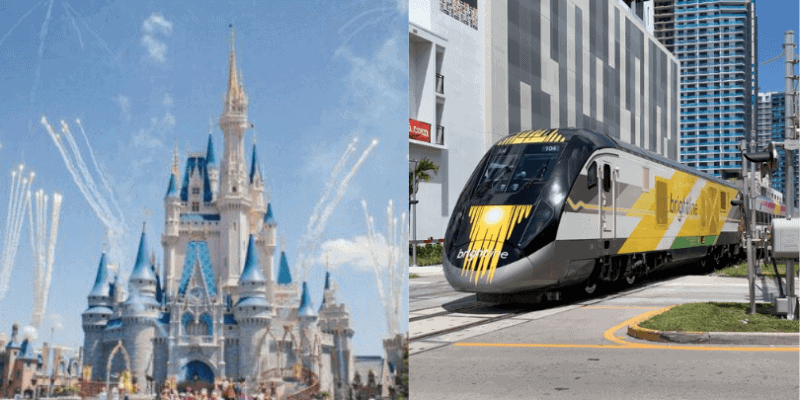 After all the talk about a high-speed railway connecting Orlando to South Florida, we finally know when it will be a reality. In just over two years, Virgin Trains USA–formerly known as Brightline–will complete its track extension between Orlando and West Palm Beach.

Traveling at speeds up to 125mph, this train will be able to transport passengers from Orlando International Airport to its Miami Central Station in the heart of Downtown Miami with current stops in West Palm Beach and Ft. Lauderdale.

The only new station guaranteed at the moment is the one at Orlando International Airport. But Virgin Trains USA is in the process of adding a Space Coast station, and a station at Walt Disney World.

What does this mean for Orlando Theme Parks?

You don’t have to decide anymore between Orlando Fun and Miami Fun. With Virgin Trains USA, you will be able to do both without having to worry about the logistics of getting from one hotel to the other. Start your trip with sunrise on Miami Beach and end it with a Walt Disney World fireworks spectacular.

Access to Walt Disney World and Universal gets easier.

Virgin Trains USA will connect all three airports, allowing you to take advantage of shuttle service from MCO to the theme parks while choosing the best flight options for your family.

High-Speed Rail from Orlando to Miami means that you now have two ports you can use to add a Disney Cruise to your ultimate Disney Vacation. While Disney Cruise Lines offers much more convenient sailings out of nearby Port Canaveral, the sailings out of there may not comply with your schedule. Virgin Trains USA will grant you the room to also search for Disney Cruises out of Miami.

For non-Disney sailers, this also means you will have easy access to the Ports at West Palm Beach, Ft. Lauderdale, and Miami for sailings on Celebrity, MSC, Royal Caribbean, Carnival, and more.

The Brightline has already become an iconic part of South Florida and carries her passengers between Miami and West Palm Beach in stylish comfort for very low fares. They currently boast an impeccable safety record and incredible punctuality. They also partnered with Lyft to provide even easier access to airports and cruise ports. The West Palm Beach-Orlando corridor will allow the train to reach its top speed of 125mph.

For those already looking ahead to 2022, be sure to reach out to the Florida Vacation experts at Academy Travel to discover how you will be able to make the most of your time in the Sunshine State.

Are you excited about this high-speed train? How would you use it in your vacation plans? Let us know in the comments!