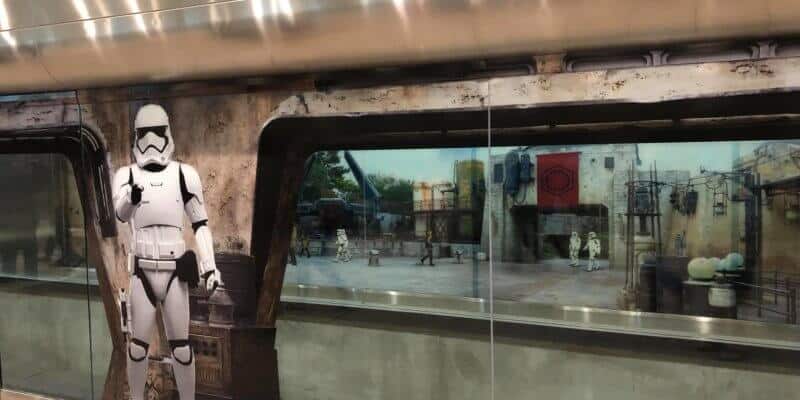 Everyone passing through Orlando International Airport (MCO) will feel as if they are passing through Star Wars Galaxy’s Edge itself. This past week, MCO dressed its walls and its shuttle stations with backdrops of the new 14-acre land in Disney’s Hollywood Studios.

The most prominent example of this is the shuttle stations. As passengers wait to board people movers to take them to their gate, they were faced with stormtroopers patrolling the area. Banners of the First Order are flying. Other sections include views one would find in Star Wars: Galaxy’s Edge, including the Millennial Falcon. There is even a spot to have a photo opportunity with a few Resistance droids. This would get anybody excited to go explore.

It makes sense that Disney would want to have a prominent presence in MCO. For many, this is the gateway to everything Central Florida has to offer, including all of the magic that awaits them at Walt Disney World Resort.

Star Wars: Galaxy’s Edge transports Disney guests to a Galaxy Far Far Away. In one of the most immersive experiences to grace Walt Disney World, you finally have the chance to pilot the Millenium Falcon, build your own droid and lightsaber, avoid detection from stormtroopers, and after it all, reflect on the adventures by enjoying a tall glass of blue milk at the famous cantina. Remember that the newest ride, Star Wars: Rise of the Resistance opens on December 5, 2019.

Have you had a chance to visit Star Wars: Galaxy’s Edge yet? Do you travel through Orlando International often? If so, what do you think of these new decorations? Let us know in the comments!