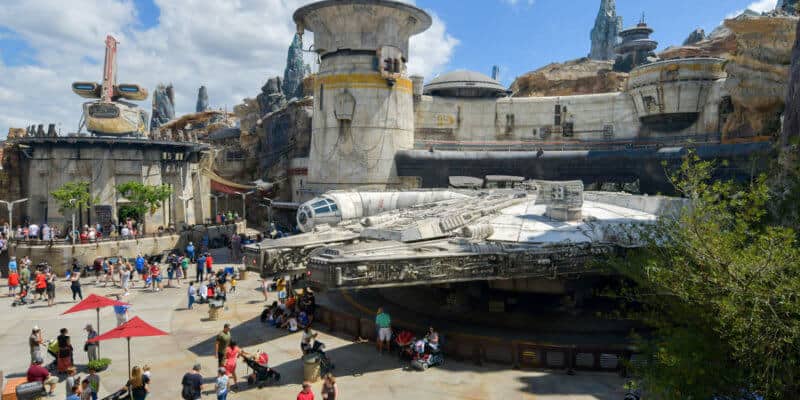 The new Tiny World Magic Shot lands you and yours right smack dab in the middle of Black Spire Outpost and its landscape with a single unique 360-degree image.

When you visit the all-new Star Wars land, you’ll also be able to enjoy other Photo Pass options, such as the Super Zoom Magic Shots available in the all-new land set in a galaxy far, far away. Both of these Super Zoom shots give guests a special memento in the form of an image with a unique view from high above the planet, as well as a special keepsake video.

The new Tiny World Magic Shot is only available during daylight hours at Disney’s Hollywood Studios’ Galaxy’s Edge and Galaxy’s Edge at Disneyland California. It is available for download as part of Memory Maker and Memory Maker Day One. Simply visit at PhotoPass Photographer at one of the PhotoPass locations near the Milk Stand, and ask for your “scan.”

After your photo is taken, be sure to stop by the Milk Stand and try a signature Star Wars-inspired drink, like the legendary green milk and blue milk. The experience is a bit of an attraction in its own right, especially for diehard Star Wars fans. You can see Luke Skywalker drink the blue milk in Star Wars Episode IV: A New Hope, and he switches the blue for the green in Star Wars Episode VIII: The Last Jedi. The signature milk drinks are made from a blend of coconut and rice milk with fruit and are served frozen. You can get yours at the Milk Stand for $7.99.

But be sure to get that Tiny World Magic Shot first! What a great addition to the travelogue of your time on the planet of Batuu on the outer rim of the galaxy.

Do you like the Magic Shots at Disney World and Disneyland? Let us know in the comments below (and drop a pic as well!)