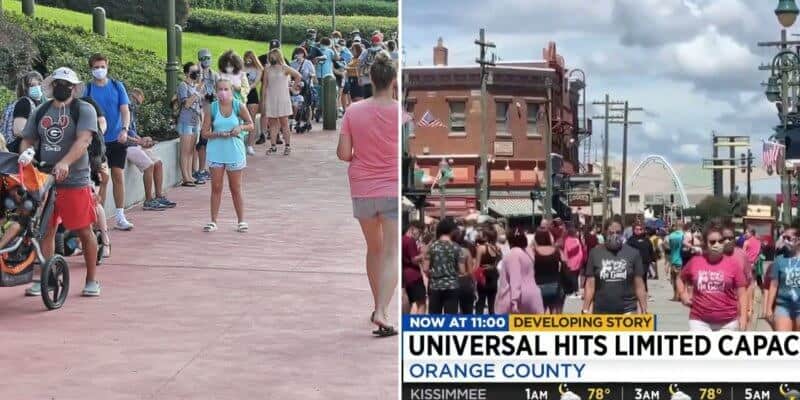 Visiting Orlando to vacation and experience some of the best thrills, immersion, and theme parks in the whole world has been a little different lately. Although each theme park will still give you a huge smile and memories that last a lifetime, things are not the same due to the ongoing pandemic. And today, unless you have a Disney Park Pass reservation or you are already at Universal, you cannot enter Universal Orlando or WDW theme parks, as they have hit capacity.

Both theme park resorts have different ways to confirm what Guests can enter. Disney has Disney Park Pass reservations which you must make in advance before visiting and Disney park. These reservations tend to sell out very fast and Guests should look to making them days (if not weeks) in advance. Universal however does not need you to pre-book, but if they hit capacity, then you can no longer enter until others leave.

Today, as the holiday season is fast approaching, all six of the theme parks at both Disney World and Universal Orlando have reached capacity. We recently reported on Disney hitting capacity today, but it is interesting to see that across Orlando the biggest theme parks are no longer admitting Guests.

As you can see below, Disney is no longer allowing for Disney Park Passes to go out to Disney Resort Guests, Annual Passholders, or Theme Park Ticket Guests for the rest of the day.

Similarly, Universal’s front page of their site also is showing Universal Studios and Islands of Adventure at capacity.

It seems that we are going to have a busy holiday season here in Orlando if the capacity limits continue to peak! Stay tuned to Inside the Magic to get all the details on what parks are at capacity.

If you want to visit Universal Orlando or Disney World over the holidays you should start planning today. Click here to get started!

Will you be heading to Universal or Disney over the holidays?